Browse the article Is the Mexican grizzly bear extinct? 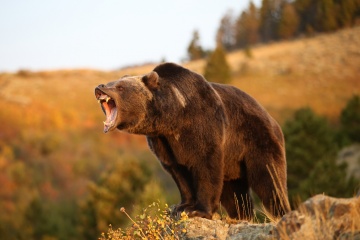 Many people may think grizzly bears are vicious, but they've gotten a bad rap.
Dennis Donohue/iStock/Thinkstock

The answer to this question depends on a definition that has changed over time. At one time, scientists thought that brown bears and grizzly bears were separate species, but today, they are considered the same species, Ursus arctos. There isn't a consensus on how best to classify them or how many subspecies there are, however. An estimated 200,000 brown bears live primarily in North America and Russia [source: McLellan]. The Mexican grizzly is a subspecies of brown bear, so cursory research would seem to indicate that the Mexican grizzly is not extinct.

However, if you do a little more digging, you'll find that the International Union for Conservation of Nature produced a book in 1982 stating that Mexican grizzlies were extinct. The IUCN is the organization that tracks the conservation status of plants and animals and ranks animals as threatened, endangered or apparently safe. The group also classifies Mexican grizzlies as a subspecies of brown bear.

The story goes like this: Once upon a time, in the not-so-distant past, a subspecies of brown bears called Mexican grizzly bears lived in the southwestern United States and parts of Mexico. By all accounts, they were smaller than their counterparts in Canada and the northern United States. In the early 1960s, a Mexican rancher began a campaign to eradicate the bears because he blamed them for slaughtering his cattle (in reality, the bears eat mainly plants and insects and rarely go after small mammals). Due to the cattleman's efforts, the Mexican grizzly was probably extinct by 1964.