Bringing Woolly Mammoths Back to Life

by Cameron Lawrence
Next 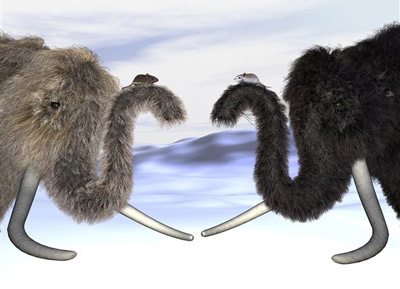 Scientists discovered a gene in the woolly mammoth attributed to hair color and now believe the animals could have come in different colors.
(AP/Photo/Illustration Knut Finstermeier)

It's been tens of thousands of years since the woolly mammoth roamed the planet, but our prehistoric, hairy friends could be back from a very long and cold vacation. A Canadian team of researchers discovered they could extract DNA from frozen woolly mammoth carcasses stuck in millennia-old permafrost.

The Canadian team made their discovery last year, extracting DNA from a mammoth frozen for 27,000 years. The researchers announced that they had sequenced 1 percent of the mammoth's genome. Now scientists believe that if can successfully harvest sperm from the testes of frozen mammoths and combine it with the genetic code, they can provide viable opportunities for bringing the mammoth back to life. There's just one problem: scientists do not have a mammoth egg to fertilize.

The current hypothesis suggests that scientists can use mammoth sperm to artificially inseminate Asian elephants, which some scientists believe to be genetically related to the woolly beasts. Of course, there's no way to verify that their efforts will actually work. And technically, the offspring would only be half mammoth. So far, the sperm hasn't been harvested, but the results of a recent study have given scientists hope. In the study, an international team of researchers tested mice sperm by freezing it, which produced limited usability, and then by freezing the entire mouse. The team found that the sperm taken from frozen mice proved to be more useful and lacked the damage of the frozen sperm. The Science Editor of the UK's Times, Mark Henderson, explains:

Even sperm taken from mouse bodies that had been frozen 15 years ago was capable of fertilizing mouse eggs and producing pups, the researchers found. The work has technical implications for the breeding of laboratory mice for medical research, but it also shows in principle that mammalian sperm can survive in a body that has been frozen for several years. This could mean that it is able to survive in similar fashion over much longer periods, as in mammoths frozen in permafrost.

If scientists can successfully bring even a half-mammoth into existence, there will be a whole slew of folks ready to make it a tourist attraction. But for now, there's still a lot of work to be done. (link)