by Mark Mancini Nov 21, 2018
This drawing shows what a Gordodon might have looked like nearly 300 million years ago. Paleontological Society

If you love learning about members of your extended family then we've got some news for you. A museum in New Mexico chose the day before Thanksgiving, when Americans celebrate family, to unveil one of our eccentric prehistoric relatives.

Ladies and gentlemen, meet Gordodon kraineri. "A fin-backed animal with an estimated weight of 75 pounds (34 kilograms), the creature was approximately 5 feet (1.5 meters) long and lived in what’s now the American Southwest about 298 million years ago during the Permian geologic period." Its discovery was announced to the public by the New Mexico Museum of Natural History and Science (NMMNHS) on Nov. 21, 2018.

Gordodon may look like a dinosaur, but it was actually a much older type of animal known as a pelycosaur. And in point of fact, pelycosaurs were more closely akin to us mammals than they were to dinos like T. rex or Triceratops.

But with that said, humans, pelycosaurs and dinosaurs are all members of a broader group: The tetrapods. This is a vertebrate superclass that includes (among other beasts) every species of amphibian, reptile, bird and mammal that ever existed.

The first tetrapods evolved around 367 million years ago and were almost certainly carnivores. Gordodon on the other hand, is a fine example of an early plant-eating variety. More significantly, it's far and away the oldest-known vegetarian tetrapod with built-in gaps between some of its teeth — which is a bigger deal than you might realize.

Gordodon was first discovered on a 2013 University of Oklahoma field trip. One student noticed a partial skeleton sticking out of a roadcut near Alamogordo, New Mexico and the rest is history.

The genus name "Gordodon" combines the Spanish and Greek words for "fat" and "tooth," respectively. This is in reference to the pelycosaur's unusual teeth. Meanwhile the species name "kraineri" is a nod to Karl Krainer, a paleontologist who's done extensive work in the Southwestern U.S.

Spencer Lucas, Larry Rinehart and Matt Celeskey — three paleontologists affiliated with the NMMNHS — describe the newfound tetrapod in an open-access scientific paper. The trio identify Gordodon as an edaphosaurid. These were a dynamic bunch of small-headed pelycosaurs with elongated vertebrae that formed tall, sail-like structures on their backs.

"Edaphosaurids," Celeskey says in an email, "were one of the first groups of tetrapods to become dedicated herbivores."

Though the oldest species was probably a carnivore, at least two unambiguously vegetarian edaphosaurids were at large in the early Permian: Gordodon and Edaphosaurus. Telling them apart is a piece of cake; just start by looking at those magnificent sails. No one knows why, but Edaphosaurus has horizontal "cross-bar" knobs jetting out of its spines. Gordodon is adorned with pointed, thorn-like structures instead. But again, it's the teeth that really make the animal stand out.

The images on the right show the Gordodon fossils discovered in New Mexico, and how those fossils would fit into the actual mammal (left).
Paleontological Society

Viewed in profile, Gordodon's skull looks almost rabbit-esque. Two long, chisel-shaped teeth are situated right at the front of the mouth. And further back, there are sets of tiny cheek teeth on the upper and lower jaws.

What's between the incisors and the cheek teeth? Some empty, toothless real estate on the jawbones.

"Diastema" is the technical term for any inter-tooth gap in an animal's jaw. "Gordodon has a large diastema in its jaws between the cropping incisor-like teeth at the front of its mouth and the peg-like teeth at the back," Celeskey says. "We see this a lot in mammals alive today, like rodents, rabbits, horses [and] goats."

Edaphosaurus stands in contrast to those living species. Its mouth had dense rows of uninterrupted, leaf-shaped teeth, which look tailor-made for a diet of thick leaves and other highly-fibrous greens. Unfortunately, such plants aren't easy to digest and have low nutritional value. An Edaphosaurus would therefore need to consume huge quantities of them every day in order to meet its energy needs. Fortunately, the pelycosaur came equipped with a wide, barrel-shaped ribcage. So as Celeskey explains, once it swallowed a fibrous meal, the food could "slowly ferment as it worked its way through [the] voluminous gut."

Gordodon had more complicated teeth and was presumably a lot better at masticating. Lucas recently emailed us about the virtues of tooth gaps. "A dentary diastema enables cropping of vegetation and its storage and initial processing in the front of the mouth, before the food is passed back to the cheek teeth," he said.

Given their respective dental setups, Gordodon and Edaphosaurus probably munched on different plants. Maybe the former — with its more specialized teeth and narrower snout — was a choosy browser who gobbled up low-fiber vegetation.

Whatever the case may be, Gordodon has shaken up our understanding of the way plant-eating tetrapods evolved. Prior to this animal's discovery, the oldest vegetarian tetrapod in the fossil record to showcase diastema was a mammal-like creature that lived 205 million years ago in the Triassic period.

Yet over 90 million years earlier, Gordodon had already set the bar for dental complexity. As Celeskey explains, "It was completely unexpected to see this level of specialization in an animal as old as Gordodon."

In a similar vein, paleontologists used to think the first handful of tetrapod vegetarians all had the same general feeding habits. Gordodon and Edaphosaurus prove otherwise. "There was much more diversity of feeding types very early in the evolution of herbivory," Lucas says. "We really didn't understand this before the discovery of Gordodon, and no doubt more remains to be discovered."

NOW THAT'S INTERESTING
Painter Georgia O'Keeffe's retreat of choice was the world-famous Ghost Ranch in northern New Mexico. As it happens, this place is also a hotbed for fossils — and in 2006, a bipedal Triassic reptile discovered on the premises was named Effigia okeeffeae in her honor.

How Much Will Americans Spend on Thanksgiving This Year?

What's the Difference Between Apple Juice and Apple Cider? 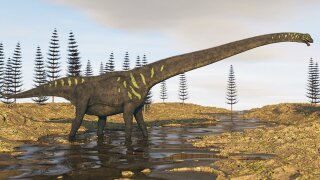 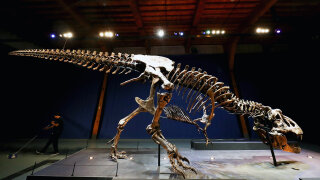 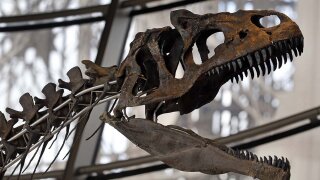