by Mark Mancini Apr 26, 2019
Simbakubwa kutokaafrika, a gigantic carnivore larger than a polar bear, is known from the remains of most of its jaw, portions of its skull and parts of its skeleton. MAURICIO ANTON

Although its name means "big lion from Africa," Simbakubwa kutokaafrika was no lion. In fact, this long-extinct mammalian predator wasn't even a cat.

But it sure was big. The most conservative estimate puts the creature's weight at 617 pounds (280 kilograms), which is on par with the bulkiest modern lions. Yet the monster could've potentially weighed up to 3,425 pounds (1,554 kilograms), making it heavier than any carnivorous land mammal alive today.

You might say Simbakubwa kutokaafrika was discovered twice. The only fossils yet attributed to this species are some foot bones, a partial snout and a massive lower jaw complete with 4-inch (10-centimeter) canines. All these remains likely came from an adolescent animal; full-grown adults might've been even larger.

Sometime in the late 1970s or early 1980s, the 22 million-year-old fossils were unearthed at Menswa Bridge, a dig site in western Kenya. Afterward, they wound up in a collection drawer at the Nairobi National Museum.

"Most of the specimens that I study are quite small," Stevens told Reuters, "so you can imagine my surprise when I opened a drawer that I hadn't examined yet, and saw the enormous teeth glinting up at me."

Stevens describes the fossils in a new paper she co-authored with fellow paleontologist Matt Borths. The Journal of Vertebrate Paleontology published their study on April 17, 2019.

Simbakubwa was an especially large hyaenodont. Unrelated to actual hyaenas, the hyaenodonts were a group of predators that first appeared about 62 million years ago and dispersed across Africa, Eurasia and North America.

Then, roughly 11 million years ago, the last hyaenodonts died out. Nobody knows why, but continental drift and the rise of new, competing predatory mammal lineages probably contributed to their decline.

Simbakubwa is the oldest known member of a hyaenodont subgroup that apparently had its origins in Africa and the Arabian Peninsula. As the newfound species reveals, these beasts attained huge body sizes early in their evolutionary history. Being big may have allowed them to hunt some of the colossal forerunners of today's elephants, hippos and hyraxes that shared Simbakubwa's Kenyan habitat.

Now That's Scary
Like many other hyaenodonts, Simbakubwa had three sets of "meat-slicing teeth" in the back of its mouth. Dogs, cats, bears and actual hyaenas only have one set apiece.

Eugene Shoemaker: The Only Human Buried on the Moon

Poutine Is Routine in Canada 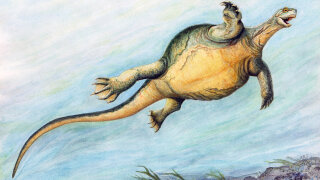 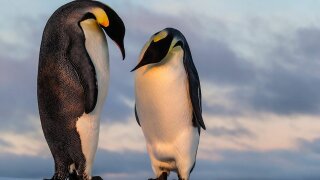 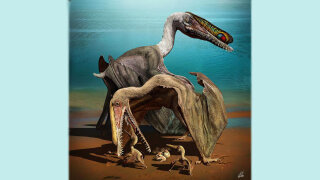