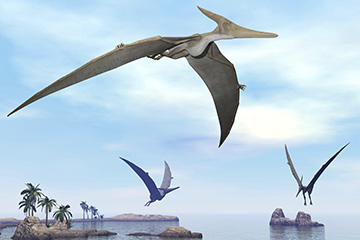 Most people learn about pterosaurs from the movies, but unfortunately these depictions do little to capture the diversity of these amazing creatures. The one in "King Kong" (1933), for example, was virtually the same as the one portrayed nearly 70 years later in "Jurassic Park III" (2001). In reality, paleontologists have identified roughly 130 pterosaur species, ranging from the airplane-sized Quetzalcoatlus northropi to Nemicolopterus crypticus, which was no bigger than a small songbird [sources: Witton, Wang et al.]. Some had teeth, some had tails, and the head crests came in all different shapes and sizes. The truth, it turns out, is more interesting than fiction.

But before we move on, where did Hollywood get their inspiration? Mostly from Pteranodon, a pterosaur with a wingspan as wide as 22 feet (7 meters), a long, toothless beak, and a bony crest [source: Unwin]. Filmmakers likely latched on to these iconic creatures because they were discovered early and often. Paleontologist O.C. Marsh collected the first fossils in western Kansas in 1870, and since then, more than 1,000 specimens have been dug up, making it one of the best-represented pterosaurs on Earth. Pteranodon was also the first pterosaur discovered in the United States, and there's nothing movie-goers like better than an all-American hero! [sources: Bennett, Unwin]

While Pteranodons are a bit bizarre in their own right, other pterosaurs took things to a whole new level. One way was through those head crests. Take Tapejara imperator, a pterosaur from the late Cretaceous period found in northeast Brazil. Its headgear, which looked like a boat sail fanning outward off the back of its skull, would have been the perfect accessory for the country's Carnival celebration [source: Hone et al.]. Another pterosaur from that period, Nyctosaurus, sported an antlerlike crest three times the length of its skull that made it look like it was wearing a set of television-antenna rabbit ears [source: Bennett].

And then there's Pterodaustro, a pterosaur that originated during the early Cretaceous in Argentina. This creature was much smaller than Pteranodon, with a wingspan just over 4 feet (1.3 meters), and it had a long, upward-curving snout. Embedded in the bottom jaw were more than 1,000 long, needlelike teeth that gave Pterodaustro the appearance of a massive underbite. This peculiar look led one pterosaur researcher to call it "a toothbrush with wings" [source: Hone et al.]

What's with the Head Crest?

One of pterosaurs' most distinctive features is the head crest, a striking structure made of hornlike material and soft tissue supported by bone. Some evidence suggests they might've even been brightly colored. Whatever the crests' exact appearance, there is significant disagreement over what they were actually used for. Some paleontologists think they helped pterosaurs distinguish one species from another, while others argue they attracted mates, regulated heat, or acted as a rudder in the air or a keel in the water [sources: American Museum of Natural History]. 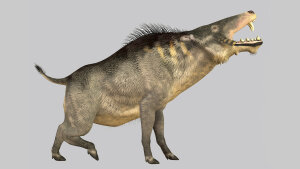 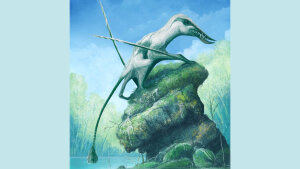