Scientists have long been able to use incomplete fossils to reconstruct and infer what an entire animal was like when it was alive. But what happens when even an entire fossilized animal presents a mystery? What then?

Fossils of the ancient aquatic animal Tullimonstrum gregarium — known more commonly as the Tully Monster — have been a source of intrigue ever since surfacing half a century ago. The weird Tully Monster lived 300 million years ago and its soft body could grow to be a little less than a foot (about 30 centimeters) long. In a particularly confusing configuration:  tiny teeth at the end of a long, narrow, trunk-like extension, and eyes affixed to either side of a rigid bar that crossed its body. Its mouth was far, far from the rest of what could be considered its face.

So scientists have known what the Tully Monster looked like – but what was it, exactly?

"Basically, nobody knew what it was," says study co-author Derek Briggs in a press release accompanying a new study published in the journal Nature today. Briggs is a Yale professor of geology and geophysics, and curator of invertebrate paleontology at the Yale Peabody Museum of Natural History. "The fossils are not easy to interpret, and they vary quite a bit. Some people thought it might be this bizarre, swimming mollusk. We decided to throw every possible analytical technique at it."

A paleontology team led by Yale University researchers has solved the mystery, determining for the first time that little Tullimonstrum was a vertebrate with gills and a stiffened rod (called a notochord) to support its body. The team examined more than 2,000 Tully Monster fossils, and used an advanced technique called synchrotron elemental mapping to examine the chemical composition of a fossil and create a virtual map of what its physical features would have been when alive.

Amateur fossil collector Francis Tully, the animal's namesake, was the first to discover a specimen in a northeastern Illinois coal-mining pit, delivering one to paleontologists at Chicago's Field Museum of Natural History in 1958. And even though the creature was officially described eight years later, when it received its scientific name, it was still never definitively identified with one of the major animal phyla. Researchers now suspect it may be an ancestor of today's lampreys.

Though this major mystery about this minor monster's been solved, there's yet much to learn. Its big eyes and numerous teeth suggest it was a predator, for instance, but science still hasn't determined when Tully Monsters first appeared, or when and how they died out.

Now That's Cool
You've heard of state birds, mottos and flowers. But fossils? The Tully Monster is the official state fossil of Illinois, even making its way onto illustrations on the side of U-Haul trucks registered there. 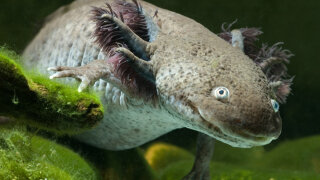 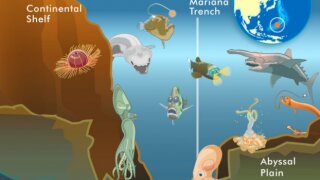 10 Weird Creatures from the Mariana Trench