Scientists Discover Why Half of All Farmed Salmon Are Partially Deaf

by Alia Hoyt Aug 25, 2017
Scientists have discovered why farm-raised salmon are so much more likely to be deaf than wild salmon. MAIKA 777/Getty Images

Salmon are known for being rich in heart-healthy omega-3 fatty acids, a great source of protein and packed with vitamins. Sadly, the farm-raised variety is also becoming known for being unnecessarily deaf, according to the results of a new study from the University of Melbourne published in the Journal of Experimental Biology.

Scientists have been aware since the 1960s that much of the world's farmed fish suffered from an ear deformity, but only now have they determined why this happens. The sagittal otolith, a tiny crystal in a fish's inner ear, contributes to both balance and hearing. It is made up of calcium carbonate. The typical form of this calcium carbonate is aragonite. However, in affected fish it is changed for vaterite. The researchers compared the crystal composition of salmon from farms all over the world, and discovered that slow-growing fish have far less of the vaterite-formed crystals.

Farm-raised salmon, which are up to five times larger than their wild counterparts, have about three times more vaterite. The researchers think this is due to genetics, diet, exposure to extended daylight, but most of all, to their accelerated growth rate. These factors aren't disconnected — since fish only eat and grow during daylight, many farms keep the lights on 24 hours a day. The deformity is irreversible. (A previous study by the same team showed about 50 percent of farmed salmon were partially deaf.)

"These results raise serious questions about the welfare of farmed fish. In many countries, farming practices must allow for the 'Five Freedoms', which are freedom from hunger or thirst; freedom from discomfort; freedom from pain, injury or disease; freedom to express (most) normal behaviour; and freedom from fear and distress," study co-author Dr. Tim Dempster of the University of Melbourne said in a statement.

"Producing animals with deformities violates two of these freedoms: the freedom from disease, and the freedom to express normal behaviour. But fish farms are very noisy environments, so some hearing loss may reduce stress in hatcheries and sea cages. We still don't know what this level of hearing loss means for production," he added.

About 95 percent of hatchery-produced salmon around the world have excessive vaterite, and it can cause up to a 50 percent hearing loss, the team found. This is likely a major conservation roadblock, since farmed juvenile fish are often released into rivers to boost the declining wild salmon population. Sadly, the hearing impairment could adversely affect their survival rate. If fish can't hear, they are more vulnerable to predators; plus, salmon use their hearing to navigate back to home rivers to breed.

The researchers hope to see changes in the hatchery environment. "As vaterite decreases hearing sensitivity, reducing growth rates in hatcheries may improve the welfare of farmed fish and increase the success of conservation efforts," they write in the study.

Now That's Cool
Salmon is the most efficient type of protein production because the fish require only 1.2 pounds (544 grams) of feed to turn out 1 pound (453 grams) of salmon. Chicken isn't too far behind, only requiring 1.9 pounds (861 grams) of feed to produce 1 pound of chicken. By comparison, beef needs 8.7 pounds (3.9 kilograms) of feed for the same amount.

Massive Asteroid Passing Near Earth in September, But Don't Freak Out

How the Deep Underground Neutrino Experiment Will Work 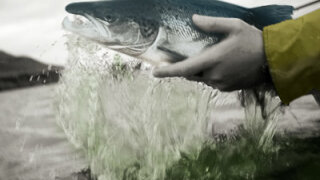 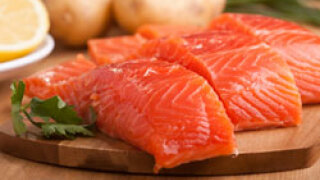 Save vs. Splurge: Pacific or Atlantic Salmon (farmed vs. wild) 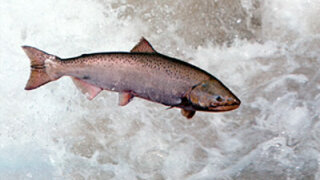