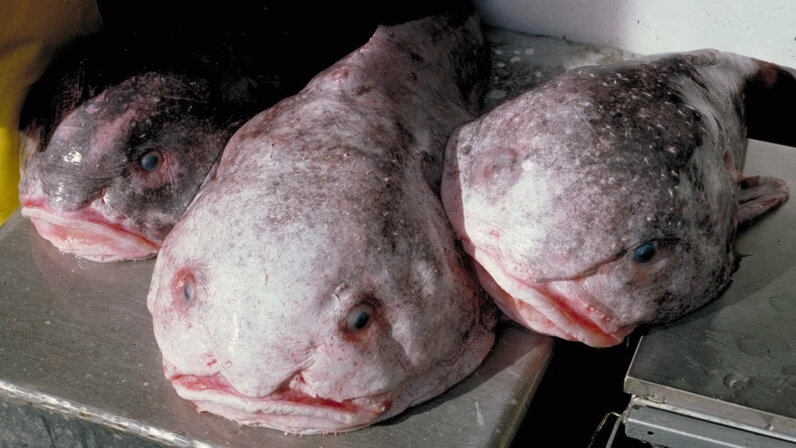 The blobfish (Psychrolutes phrictus) looks like a normal fish under water, only really becoming a blob when it transitions from the pressure at depth to the surface. NOAA/Wikimedia Commons

Imagine someone voted you the ugliest person at work. You would be upset, right? Well, it's a very good thing the blobfish (Psychrolutes microporos), a member of the illustrious fathead sculpin family of fishes, doesn't speak English and also lives very far away — 3,300 feet (1,000 meters) under the ocean, in fact — because in 2013, it was voted the World's Ugliest Animal by The Ugly Animal Preservation Society.

The blobfish's disgruntled visage became an overnight international sensation in 2003 when the NORFANZ expedition pulled up a large, pink blobfish off the northwest coast of New Zealand. It had a parasitic copepod hanging out of its mouth, and looked like the cartoon character Ziggy after a month-long bender. The crew called it Mr. Blobby and snapped a now-famous photo — some would go so far as to call it a mugshot — of this bulbous fish out of water.

Part of the blobfish's ... charm, if you want to call it that, lies in the uncanny valley, the fact that it looks human, but something ain't right. But here's the thing: We were never meant to see the blobfish like this.

"Blobfish are pretty 'normal' looking underwater," says Gareth Fraser, a professor in the Department of Biology at the University of Florida who studies the evolutionary development of marine fishes. "They only really become a blob when they transition from the pressure at depth to the surface. In my opinion they were awarded the ugliest animal status unjustly."

So, why is the blobfish so ... blobby? Well, it's actually a very clever adaptation: At the extreme depths the blobfish calls home, they go about their business experiencing about 120 times the pressure we do on dry land. Because of this, they don't need very much bone or muscle to give their bodies form — they just let the pressure of the bottom of the ocean do all that work for them. But up here in the air, there's nothing to keep a blobfish's body from melting into a formless, globular puddle. Terra firma is definitely not where the blobfish shines.

But the blobfish has some other cool features besides its pretty face. In fact, the aspic-like texture of its flesh is unique in itself. Lots of fish stay afloat thanks to a handy little gas-filled sac called a swim bladder. But in the high pressures of the deep sea, a swim bladder would just burst. The blobfish found a workaround, though! Their meat has a buoyant, jelly-like consistency that keeps them cruising around at the depth at which they're most comfortable.

Although very little is known about the blobfish's life history, another blob-ish aspect of this animal is that it doesn't seem to move around very much or have very many friends. Remember, they have very little muscle, so it's not like they're the most ferocious predators of the deep sea. Nobody has ever seen a blobfish eat, but scientists think they most likely enjoy a diet of whatever just floats into their mouths. In addition, every blobfish ever spotted by researchers has been all alone — they don't seem to school up — and scientists are not sure how they reproduce or how often they encounter others of their kind.

The scarcity of blobfish in their known habitat has some scientists concerned. Although it's possible they're being caught up in trawling nets at that depth, it's not likely — those nets are vast, but not that big. What poses a bigger threat to blobfish in the long term is rising ocean temperatures — blobfish seem to need to live in very deep, cold water or extreme latitudes.

Mystery, thy name is blobfish! That being said, all signs point to this species doing pretty well for itself, considering.

Now That's Interesting
If you're interested, you can purchase enough stuffed blobfish to fill a bathtub for $650.