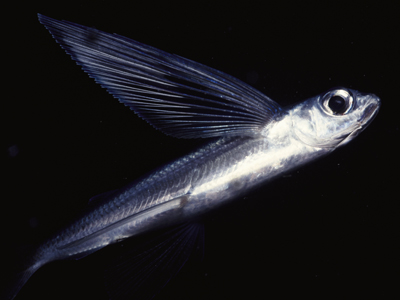 To escape predators such as swordfish, tuna, and dolphins, flying fish extend their freakishly large pectoral fins as they approach the surface of the water; their velocity then launches them into the air.

A flying fish can glide through the air for 10 to 20 feet--farther if it has a decent tailwind. It holds its outstretched pectoral fins steady and "sails" through the air, using much the same action as a flying squirrel.

If you'd like to catch sight of a member of the Exocoetidae family, you'll have to travel to the Atlantic, Indian, or Pacific oceans, where there are more than 50 species of flying fish.

Whiskers are not an indication that a flying fish is up there in years; actually, it's the opposite. Young flying fish have long whiskers that sprout from the bottom jaw. These whiskers are often longer than the fish itself and disappear by adulthood.

Attached to the eggs of the Atlantic flying fish are long, adhesive filaments that enable the eggs to affix to clumps of floating seaweed or debris for the gestation period. Without these filaments, the eggs (which are more dense than water) would sink.

There are about 40 known species of flying fish. Beyond their useful pectoral fins, all have unevenly forked tails, with the lower lobe longer than the upper lobe. Many species also have enlarged pelvic fins and are known as four-winged flying fish.

Flying fish can soar high enough that sailors often find them on the decks of their ships.