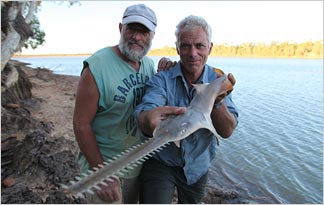 Contrary to popular belief, freshwater sawfish are not sharks; they are fish from the ray species that have the bodies like sharks and snouts (called rostrums) like sharp blades. Found in countries like Africa, Australia, Pakistan and India, these fish have between 14 and 23 toothlike denticles called rostral teeth that rest on either side of their rostrums. Male freshwater sawfish have more rostral teeth than the females. When sawfish are born, these denticles protrude less, and are covered by a tissue sheath, so that they don't injure the sawfish moms during the birthing process.

Don't Mess with Me:

Freshwater sawfish can grow to 20 feet (6 meters) in length. They gather their food by swinging their rostrums from side to side to separate invertebrates from the surfaces they live on, and to stun schools of fish. These sawfish also like to eat freshwater prawn and shrimp. Other predators in the water know not to mess with them and rarely do, but sharks and saltwater crocodiles sometimes take their chances, typically hunting juvenile sawfish, which are smaller in size.

The indigenous peoples of Western Australia have long relied on the meat of freshwater sawfish for survival. The animals' other body parts are valuable commodities, too: For example, people sell their fins in Asia, process their livers for oil and make their skin into leather. The eggs, liver oil and bile of the freshwater sawfish are also used in traditional Chinese medicine.

"It actually felt very strange on the line. A bit like a stingray in a way, but the jarring I could feel wasn't the stingray's tail hitting the line. It was the rostrum teeth..."