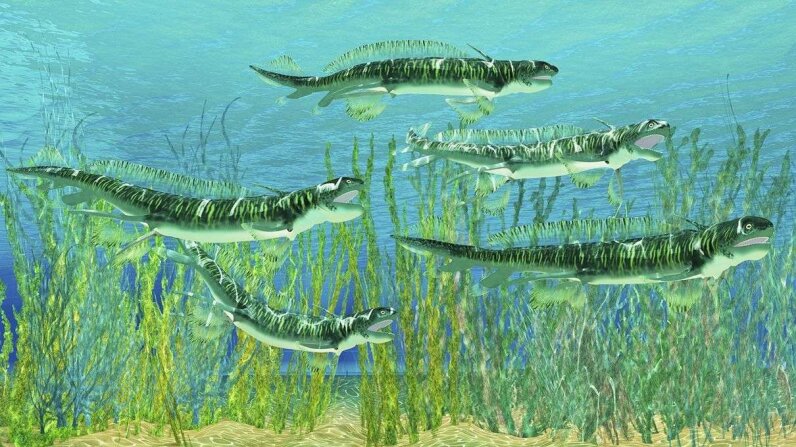 An artist's conception of what the eel-like Orthacanthus looked like. Corey Ford/Stocktrek Images/Getty Images

You know how people do that weird thing when a cute baby's nearby, where they tickle the baby and say things like, "Ooh, who's a cute baby? Who's so cute? Who's so cute I could just eat him up?" According to a new study, an ancient precursor to modern sharks had the cutest babies around. OK, that's a bit of an extrapolation — and probably not an accurate one at that. But the study did show that around 300 million years ago, the Orthacanthus shark engaged in the practice of feeding on its own young.

The practice, known as "fillial cannibalism," was identified thanks to evidence found in a shark coprolite — a fossilized piece of feces. As a study in the journal Paleontology details, scientists from Trinity College Dublin discovered the presence of juvenile Orthacanthus teeth inside an Orthacanthus coprolite. (The scientists know it's ancient Orthacanthus poop because of its unique spiraling shape — that eel-shaped ancient shark actually had a corkscrew-shaped rectum which gave its feces an idiosyncratic form.) Mature Orthacanthus grew to almost 10 feet (3 meters) long, and was the apex predator of the swamps and bayous it inhabited.

The coprolite fossil was discovered in a coalfield in Minto, New Brunswick, Canada, but when the ancient shark roamed, that location was closer to the equator. At that time, freshwater rivers, coastal swamps and saltwater oceans all intersected, and paleontologists surmise that ocean fish like the Orthacanthus started to use secluded freshwater spaces as nurseries, where young sharks were protected from other predators.

"Orthacanthus was probably a bit like the modern day bull shark," says lead author Aodhán Ó Gogáin in a press release, "in that it was able to migrate backwards and forwards between coastal swamps and shallow seas. This unusual ecological adaptation may have played an important role in the colonization of inland freshwater environments."

However, say the scientists, Orthacanthus may have turned on its own young when other food sources in the freshwater swamps became scarce. And while the idea of prehistoric shark-eels consuming the flesh of their flesh may seem gruesome, it's not all that uncommon. Animals killing and eating their own young, or the young of others of their species, may sound strange but it's not unheard of — the same behavior's been observed across the animal kingdom and in many mammals, from dolphins to bears and bonobos.

Now That's Cool
Food sources can do crazy things to an ancient shark; recent research indicates changes in its prey may have caused the extinction of bus-sized shark megalodon.