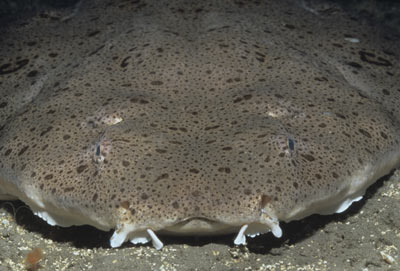 Does this look appetizing to you?
Richard Hermann/Visuals Unlimited/Getty Images

Larger sharks, including the great white shark, may prey on the angel shark, but the angel shark's real threat is man. Or more specifically, one man, by the name of Michael Wagner. Until the 1970s, angel sharks were thought of as a "junk fish," something that got caught in a fishermen's net by accident. Fishermen threw them back, until Wagner, a seafood processor in California, began to spread the word about the tastiness of the Pacific angel shark.

While this was good news for inventive cooks and shark connoisseurs, it was extremely bad news for angel shark populations, which were nearly decimated when the high fishing rate was combined with their low reproductive rate and slow growth.

Pacific angel sharks typically give birth to litters of about 8 to 13, while other species may have litters of just six or up to 25 [sources: Martin, Awruch et al., Hansen]. The gestation period varies among species but is generally between eight and 10 months. Angel sharks are ovoviviparous, which means that the females carries the eggs, but the eggs hatch inside and the pups are born live. Angel shark pups measure only about 9 inches (23 centimeters) at birth. Adults try to protect the small pups by giving birth in deeper waters [source: Martin]. Still, only about 20 percent of Pacific angel sharks survive to maturity [source: Bester].

Not every angel shark is subject to this kind of fishing, but many angel shark populations have been declining [source: Morey et al.]. In some areas, the fish appears to have vanished completely, but specific numbers are hard to come by. These sharks are listed as "vulnerable" by the International Union for Conservation of Nature (IUCN), and some of the fisheries are subject to increased regulation. When not caught, it's estimated that angel sharks live about 25 years [source: Kay].

You can fish for more information on angel sharks and other shark species below.

While today's divers and diners might be the only ones to meet an angel shark, that wasn't the case in 77 A.D. That was the year that Pliny the Elder completed his "Natural History," an encyclopedia of the natural world that was one of the leading scientific texts until the Middle Ages. It also includes some unique ways that mankind can use other inhabitants of the natural world, including angel sharks. For those cleaning house, Pliny said, the skin of an angel shark would work wonders while dusting. And if your needs were a bit more medicinal, the angel shark could help there as well. According to Pliny, angel shark flesh could relieve swollen breasts and when burnt, cure acne [source: Lineaweaver].