Why are cookiecutter sharks called that? 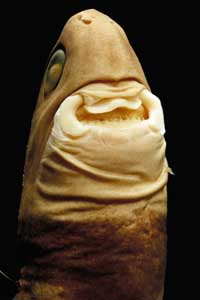 Cookiecutter sharks are one of many species of bioluminescent fish in the sea. Bioluminescence means their bodies glow. Among sharks, cookiecutters glow the brightest [source: Parker]. In fact, its scientific name Isistius brasiliensis comes from the Greek goddess Isis, the goddess of light [source: ReefQuest Centre for Shark Research].

Bioluminescence occurs in cookiecutter sharks because of the presence of photopores glands, particularly concentrated on its lower belly. These glands produce an enzyme called luciferose that converts chemical energy to light energy, causing the glow. Transparent cells surrounding the glands also allow the light to shine through the cookiecutter shark's skin [source: Parker].

Since the shark swims closer to the surface of the water at night, predator fish will see it from below. From this vantage point, the glowing belly of the cookiecutter shark looks like a spot of sunlight or moonlight shining through the water. That perspective makes the luminous part of its body virtually invisible to predators. Other fish aside from cookiecutters also practice this camouflage called counterillumination [source: Milius].

However, one wide stripe around the cookiecutter shark's neck does not glow. Fish can distinguish that non-glowing part, which may seem like an evolutionary pitfall. But this is actually the cookiecutter shark's trump card. Because the rest of its body is camouflaged by the bioluminescence, to other fish, it looks like the cookiecutter's body only consists of that small portion around its head and neck. Since it appears much smaller than it is, the shark attracts predator fish looking for an easy snack. By luring the fish to come to it, the cookiecutter then has more power to bite them than if it tried to use its feeble strength to approach [source: Milius].

Once the predator goes in for the kill, the shark whips around and latches on to its opponent's flesh with the suction power from its fleshy lips. Digging its razor-sharp teeth into fish, the cookiecutter shark then spins its body around, carving out a cookie-shaped lump of meat like a wild melon baller. After the cookiecutter shark has taken its fill, it releases the fish. Fish can usually survive a cookiecutter attack, but the wound may fester or become infected.

To keep them primed for attacks, cookiecutter sharks periodically lose their teeth. Their interconnected chompers fall out as a unit like dentures. When that happens, cookiecutters actually swallow their teeth to absorb the extra calcium [source: Florida Museum of Natural History].

If you'd like to learn more about cookiecutters and their shark family members, see the links below.