by Dave Roos Jul 21, 2017
No, the race between Olympic swimmer Michael Phelps and a great white shark won't go down like this. Though it sure would be entertaining. David Jenkins/MCT/Getty Images

The Discovery Channel is upping its "Shark Week" antics on Sunday, July 23, with a much-hyped race between 23-time Olympic gold medalist Michael Phelps – arguably the fastest man in water – and a great white shark. Yes, a real, live great white, the largest and most feared predatory fish on Earth.

But how exactly does a human go head to head (nose to nose?) with a shark? Did they fill an Olympic-size pool with salt water and hope the great white stayed in its lane (and his trunks)? Did Phelps take to the open ocean with a chum bucket tied to his leg?

Discovery hasn't divulged many details about the prerecorded race, which will air July 23, but Phelps – who is alive and in one piece, thankfully – has been leaking some clues on the morning talk show circuit. So, here's what we know:

Discovery is kicking off Shark Week with the epic race, which it's dubbing "Phelps vs. Shark: The Battle for Ocean Supremacy." The record-breaking swimmer will also appear later in the week in "Shark School with Michael Phelps," in which Phelps travels to the Bimini Shark Lab in the Bahamas to swim with some toothy fish and dispel some myths about these fascinating creatures.

Samuel "Doc" Gruber, who holds a Ph.D. in marine science, runs the Bimini Shark Lab and is a leading authority on shark behavior and physiology. A former competitive swimmer and diver himself, Gruber introduced Phelps to some of the shark species found in the warm Caribbean waters.

Reached by phone at his office in Miami, Gruber scoffs a bit at the premise of the "Shark School" program, which is that Phelps is in Bimini to overcome his innate fear of sharks.

"For the story's sake, he had never been in the ocean with a shark and had a certain trepidation," says Gruber. "He really wasn't afraid." To suit the story line, Gruber eased Phelps into the water with a succession of increasingly large and potentially threatening fish. Phelps started with Caribbean reef sharks, first in a cage, then out. Then he "graduated" to bigger animals, including a great hammerhead that Gruber lured in with bait.

"These great hammerheads are really nice animals," says Gruber. "Michael was able to go down and hand feed them and swim with them, do all kinds of things with them. Then he graduated to bull sharks, which are supposed to be the most dangerous ones. He stayed in the cage for that one."

Gruber wasn't involved in the South Africa race, but he and his team helped Phelps prepare by taking his first timed open-water runs in Bimini with the monofin. They clocked his 100-meter time at around 18 seconds, easily fast enough to outswim a patrolling great white, which was cruising at a leisurely 2 mph (3.2 kph).

"There are 500 species of shark and 600 rays, all of which have different swimming styles and speeds," explains Gruber. Some, like the great white, swim like tuna (aka thunniform swimming) with very little side-to-side head movement, lots of thrust from the tail, and very stiff bodies, which are highly hydrodynamic for high-speed long-distance swimming.

Like the rest of us, Gruber is puzzled how exactly Phelps could manage to race a great white in open water. "I don't know how you get a shark to swim a course on command," says Gruber.

The Truth About Sharks

Despite their oversized presence in the popular imagination, great whites are some of the least understood of all shark species. Great whites are solitary hunters with unpredictable migratory paths, and none have survived long in captivity, making them very difficult to study. No researchers, for example, have ever witnessed great whites mating or giving birth. Underwater footage of great whites on the attack show massive animals that can turn and change direction on a dime, making a side-by-side race impossible.

"I wouldn't want to do it," says Gruber, who otherwise rejects the popular notion that sharks are bloodthirsty man-eaters. "Shark attacks are blown out of proportion by the media and the hype we see in Shark Week, which tries to portray the shark as a death fish from hell that wants to eat you for breakfast. That's all total nonsense."

According to a Stanford University study, California surfers have a one in 17 million chance of being bitten by a shark. Sharks don't want to eat humans – they may mistake your moving arm or leg for a fish, but once they take a bite, they'll let you go when they realize you're not tasty.

Gruber's advice if you do come face to face with a shark while snorkeling or scuba diving? "Whip out your camera and take a picture."

Let's add to that: If a shark is passing you by, National Geographic says to stay as still as possible (no swimming). In the unlikely event that you are attacked, you should fight back as best you can. Avoid using bare hands and feet and concentrate on hitting blows to the eyes and gill area. "Playing dead" at this point doesn't work.

Now That's Cool
To avoid encountering a shark, the NOAA recommends that you stay in groups, avoid the water in the early morning and at twilight, and do not go in at any time if you're bleeding or wearing jewelry. Also, avoid areas where fishermen may be dropping bait, which attracts sharks. Be cautious around sandbars – sharks like to hang out there. 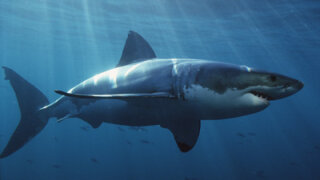 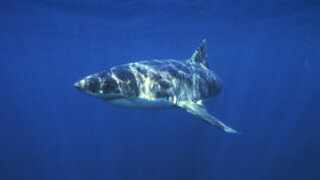 How Diving with Sharks Works 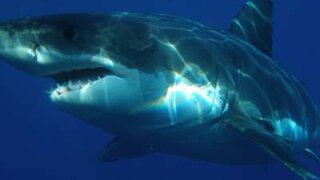 15 Tips for Surviving a Shark Attack