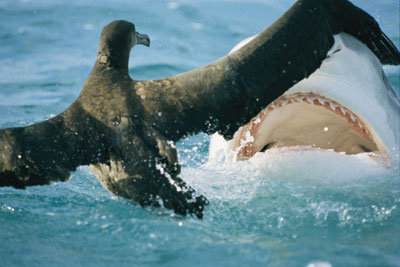 Fish and other animals can attract sharks through movement on the surface of the water. Here, an albatross is attacked by a reef shark. See more pictures of sharks.
Bill Curtsinger/National Geographic/Getty Images

That injured fish you found flapping around -- should you rescue it? Heck no! Instead, you should stay far away from injured and struggling fish. Their flapping has been shown to attract sharks. Just as land-bound predators like lions and tigers seek out the weakest of the group when they hunt for prey, so, too, do most sharks. And injured fish make about as easy prey as a shark's likely to find.

Fish don't have to be injured to attract sharks, either. Even just the flapping motion on the water's surface can draw a shark's attention. Fish that sharks prey on are also targeted by fishermen. When fishermen's nets capture masses of fish struggling to get free, it's like a neon buffet sign for sharks.

So how do injured and trapped fish attract sharks? They use a combination of their senses to detect potential prey. If a fish is injured and bleeding, a shark's legendary sense of smell comes into play. It's significant that sharks have noses since they don't use them to breathe (they have a gill system for that). Their noses are dedicated to detecting odors. Sharks have been shown to sense very small amounts of blood in the water -- as little as one part blood per million parts water [source: Shark Trust]. But fish don't necessarily have to be bleeding to be detected by sharks. The predators can also smell scents produced by fish in distress.

The senses of sight and hearing among shark species are also remarkable. Shark vision has evolved over the 400 million years the species has been around to get as much visual information as possible from the low light available underwater. And their hearing isn't too shabby, either. This is due, in part, to their aquatic habitat. Sound travels faster and farther underwater than it does through air, and sharks' hearing has adapted to pick up on minute sounds. Even recordings of the sound of flapping fish have been shown to draw sharks [source: Shark Trust].

But even with their highly developed senses working in conjunction to find prey, sharks can make mistakes. If you flap around in the ocean, you might look, sound and feel like a source of food to a shark. We all make mistakes -- even sharks.

For more information on sharks and other related material, visit the next page.