Ways to Survive a Shark Attack: When Playing Dead Can Keep You Alive 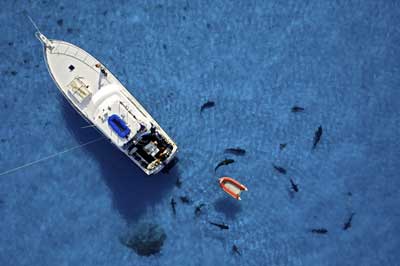 Sharks may be attracted to boats or people in the water.
Brian J. Skerry/National Geographic/Getty Images

On July 30, 1945, during World War II, the U.S.S. Indianapolis sank in the Philippine Sea near Guam. Nearly 900 sailors were left stranded in the water for four days without help. Soon after the sinking, sharks began to attack many of the men. When rescue arrived, only 316 people remained alive, although it isn't clear how many of those victims died from shark attacks.

In rare situations like this one, playing dead could work to your advantage. If sharks are in a feeding frenzy around you, they may ignore your fresh meat and continue biting at others. It may sound inhuman not to try to fight off a swarm of sharks attacking dozens of people around you in the water, but it may be your only hope for survival.

Sharks have a unique sense called electroreception. In rescue scenarios, sharks will continue to go after a wounded person rather than the fresh meat of the rescuer because it is physiologically attracted to blood. Electroreception allows sharks to detect minute changes in the electricity conducted through salt water. Adding blood to salt water alters the surrounding electricity, setting off the sharks' electroreception, which draws it back to the wounded victim.

Thrashing around in the water is also known to attract sharks. If you float calmly while surrounded by flailing, splashing people, sharks may ignore you and go for the more obvious targets. In addition, stay alert to the warning signs of an impending chomp. A hunched back, lowered pectoral fins and zigzagging motion are red flags that you look like a tasty piece of meat [source: Burgess].

Of course, if you have a chance to escape water, do so as fast as you can. And if a shark bites you, hit it back on its nose, gills or eyes.

For related information about sharks and safety, visit the links below.