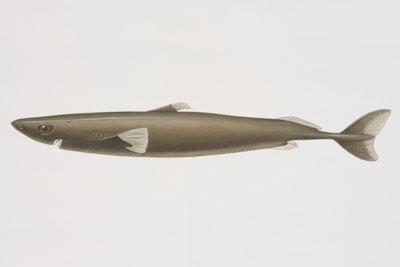 At its size, you'd think the spined pygmy would be the smallest shark. Researchers believed it was, until the discovery of the dwarf lantern shark. This little fella is an inch shorter than the pygmy. Like the dwarf, the pygmy is a deepwater fish. It's not because they have a preference for cooler waters -- it's a survival tool. The deeper you go into the ocean, the less likely you are to find larger predators.

You might also think that being small would have disadvantages come dinner time, but there's always something smaller to eat in the ocean. Pygmy sharks are actually pretty fierce predators for their size. If you're a shrimp, small squid or lantern fish, you'd better watch your back -- there may be a pygmy shark on your trail. Pygmies stay in depths of about 6,500 feet (2,000 meters) by day, but migrate vertically at night to hunt in depths of about 650 feet (200 meters.)

Pygmies don't look like other sharks, but they don't look exactly unlike sharks either. Imagine a shark drawn on your index finger and you'll be close. It's slender, grey to black with lighter colored fins and its mouth lies under its pug nose, like most sharks. Its lower teeth are larger and more heavily serrated than its smooth uppers and like other sharks, it replaces its teeth as needed. Not much is known about the life cycle or reproductive practices of the pygmy shark, but we do know that it lays eggs that hatch after birth, while many other sharks birth live pups.

The "spined" feature of the pygmy is one thing that sets it apart from its relatives. The pygmy is the only shark that has a pointy spine in the front of its first dorsal fin, but not the second. Not exactly something to brag about, but there's another physical trait the pygmy shark has that might make other sharks a little jealous -- it has a bioluminescent belly. This means that it glows in the dark. There are all kinds of sea creatures that have this unique feature, but the pygmy is the only glowing shark.

There are a couple of theories as to how the pygmy uses its glowing belly, and neither one has to do with lava lamps and incense. It's most likely an attractant to smaller prey that swims underneath it. The smaller fish approach the glow and before you know it, the dinner bell rings. Another perk to a glowing belly is that it may provide camouflage from predators. From below, the glow blends into the light from the surface above, making it less visible to predators. You can read more about this fishy feature in How Bioluminescence Works.

For more information on sharks and related topics, swim over to the links below.

Pygmies are also a group of human hunter-gatherer tribes that live all over Africa and in some parts of Asia and South America. They're known for their small stature -- adult males are rarely over 5 feet tall and females don't grow more than four and a half feet. It was long believed that environmental conditions and poor nutrition were the causes of their lack of verticality. But a recent study from the University of Cambridge places the blame on their high mortality rate. Pygmy tribes have a mortality range between 16 and 24 years old. At this rate, they would have died out long ago if it weren't for one factor -- their reproductive capabilities. Pygmy women can have babies much sooner than your average human, and because humans can't give birth until they're physically mature, you have a tribe of very short people [source: Scientific American].