by Charles W. Bryant
Prev NEXT
5 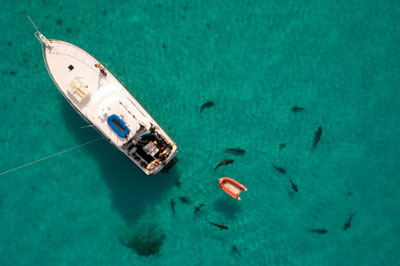 Anyone care for a swim?
Brian J. Skerry/Getty Images

­In 2004, Randall Fry and Cliff Zimmerman were free-diving for abalone in Westport, Calif., when tragedy struck. They were in about 15 feet (4.5 meters) of water and only a couple of feet apart when Fry dove and never came back up. Zimmerman reported that he turned from Fry for just a moment when he heard a "whooshing sound" and felt the water move "as if a boat went by" [source: GreatWhite.org]. Zimmerman turned to see the side of a large fish swimming by. The shark fin and part of its body surfaced momentarily at a high rate of speed before disappearing into the water again. At that point, Zimmerman said that "everything turned red."

Zimmerman swam for his life and managed to safely reach his boat about 150 feet (45 meters) away. Fry's body was found by a search-and-rescue team the following day -- bite marks stretched from shoulder to shoulder, indicating that the shark was a great white. Fry's head had been separated from his body.

You won't believe story number four -- it's on the next page.