by Charles W. Bryant
Prev NEXT
2 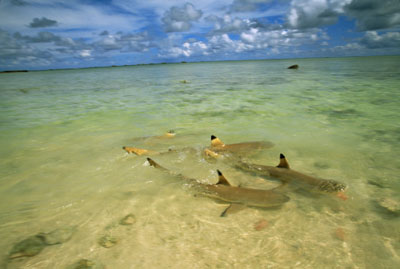 These sand sharks won't eat you. But you can eat them.
Paul Nicklen/Getty Images

­­Two ocean attacks off the Jersey shore the week of July 4, 1916, preceded the attacks in Matawan Creek. There had never been an attack in New Jersey, and it wasn't thought at the time that sharks went after living humans. Six days after the attacks, Captain Thomas Cottrell spotted a 10-foot (3-meter) shark swimming in the shallow waters of Matawan Creek, which connected Matawan with Raritan Bay. Locals thought he was simply caught up in the panic of the recent shore attacks.

Twelve year-old Lester Stillwell was the first victim. The shark took him from below and carried him under while he was swimming with friends. Local men scoured the creek looking for revenge, but the shark found them first. Watson Fisher was one of these men. He fought the shark with all he had, being pulled under and resurfacing four times. He eventually broke free, but the flesh from his right leg was missing from his groin to his knee. Fisher died hours later, becoming the second victim in less than an hour. A half-mile downstream, teenager Joseph Dunn was bitten on the leg. His three friends pulled at him from the bank as the shark tried to take him under. Eventually the shark released him, and he was rushed to a hospital, where they were able to save his leg. Two days later, a great white was caught in Raritan Bay. When it was cut open, they found 15 pounds of human flesh and bone.

For the granddaddy of all shark attack stories, please move on to the next page.