Sharks are an intelligent and sometimes dangerous species of saltwater fish. Learn more about these often feared, often misunderstood creatures of the deep in this gallery. 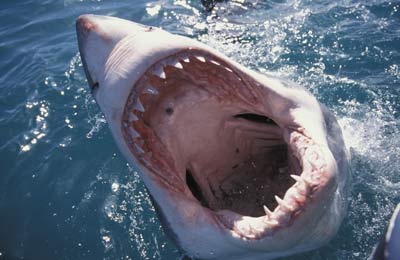 Sharks, like this great white, can lose as many as 1,000 teeth per year. Sharks' teeth are constantly replaced throughout their lives. See a great white about to make a meal of a seal on the next page. 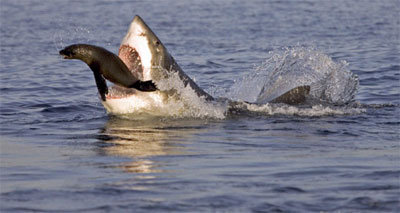 Great white sharks have serrated teeth for tearing through and removing chunks of meat. Curious what shark is named after a fruit? See the next picture. 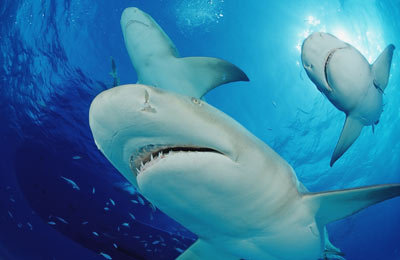 These lemon sharks (Negaprion brevirostris) are swimming in the Atlantic Ocean around the Grand Bahama Island. A diver comes face to face with a shark in the next picture. 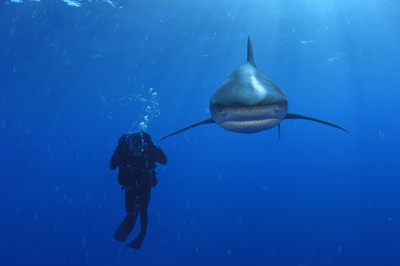 Humans pose a much greater threat to sharks, like this oceanic whitetip, than they do to us. Overfishing, finning and habitat destruction are posing real harm to shark populations. See tourists in the water with a great white shark on the next page. 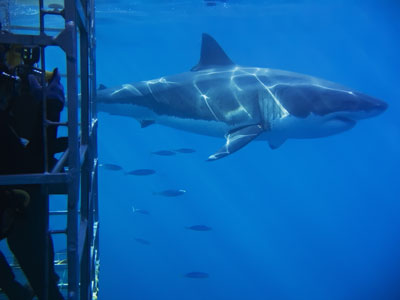 This great white shark swims past a cage full of tourists. Like the great white, the next shark is considered to be one of the most dangerous in the world. 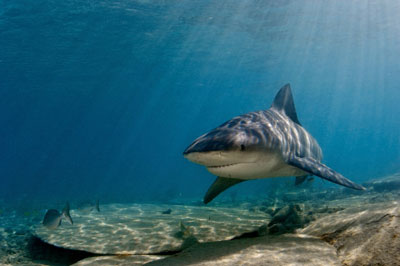 Bull sharks can live in fresh water and have been found up to 60 miles up river in warm, turbid rivers such as the Amazon and Mississippi. See how to better protect yourself from a shark attack on the next page. 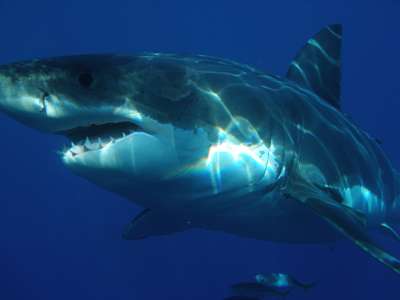 Don't wear shiny jewelry if you're going to be swimming near sharks, as they may mistake it for fish scales, like the shark about to attack a school of fish on the next page. 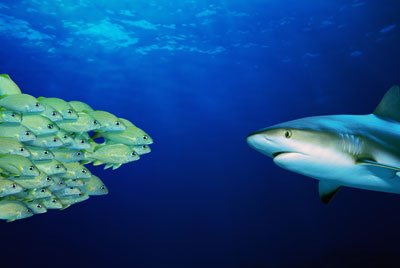 Some sharks like this Caribbean reef shark go into a frenzy like state when food is in the area but yet they still maintain a sort of pecking order. See a shark feeding frenzy on the next page. 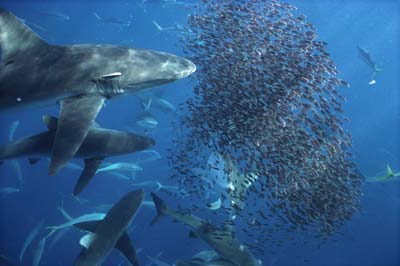 Bronze whaler sharks (Carcharius brachyurus) have an offshore feeding frenzy around the Galapagos Islands. Does a tiger shark have stripes? See the next picture. 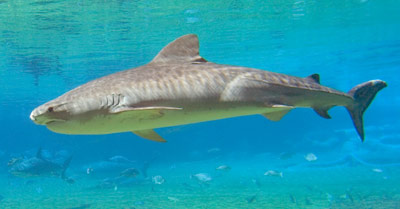 You can't see them in this picture, but the juvenile tiger shark has stripes like a tiger. Get a look at a hammerhead shark next. 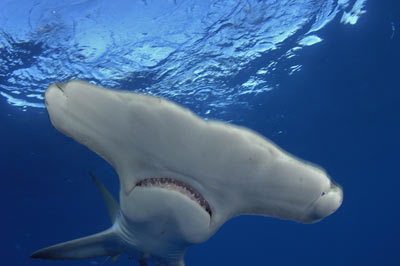 There have only been 38 recorded hammerhead attacks on humans since 1580, only 16 of which were unprovoked, and no one has ever been killed by a hammerhead. Can sharks smell? Find out in the next picture. 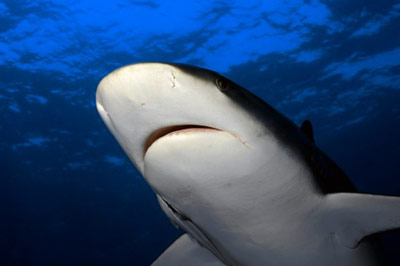 Some sharks have a sense of smell good enough to detect one drop of blood in an Olympic sized swimming pool. The sharks in the next picture are commonly found around reefs. 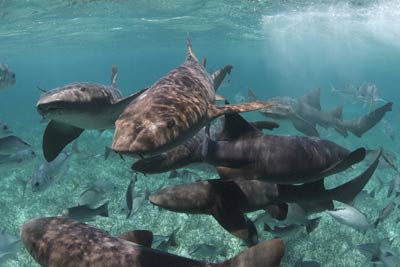 Atlantic nurse sharks are commonly encountered on Caribbean reefs. The next shark usually is shy around divers -- except when baited. 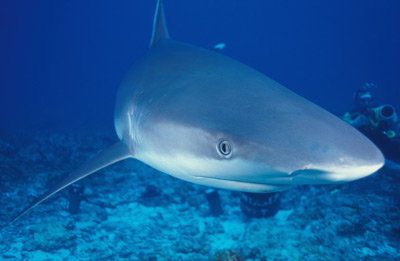 Sharks, like this silvertip, do not chew and swallow their food as we do. If a shark is able to take a prey item that fits in its mouth then it will swallow it whole. See another shark that shares the Indian Ocean on the next page. 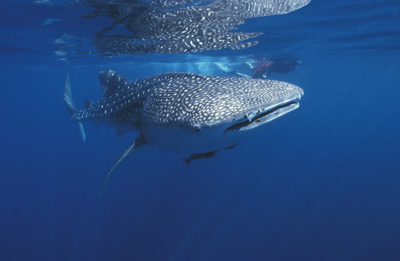 The whale shark's mouth can be six and a half feet wide, yet the shark eats mostly tiny plankton. The next shark can be seen off the coast of Hawaii. 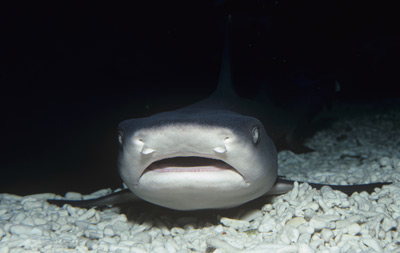 A white-tipped reef shark lurks in the tropical Indo-Pacific. Try to avoid these sharks because they seem to be fairly aggressive by nature. The next shark has six gills...take a peek. 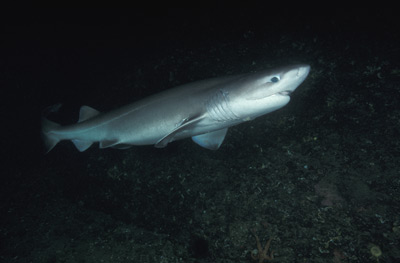 The sixgill shark tends to be found in deeper waters. A full-length silvertip shark is on the next page. 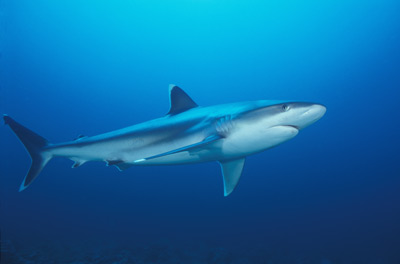 Silvertip sharks, unlike the great white on the next page, aren't a large threat to divers. 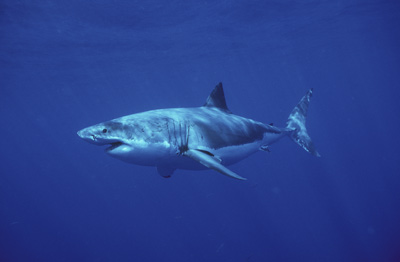 Less than 5% of sharks are giants like this great white. The next pictures showcase nurse sharks. 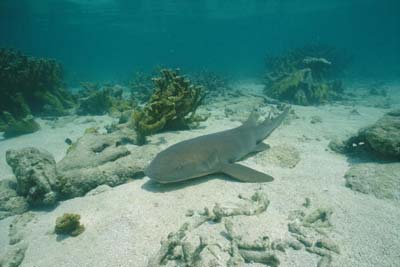 The nurse shark doing what it does best -- resting. Nurse sharks can pump water over their gills and are able to stay motionless on the bottom. 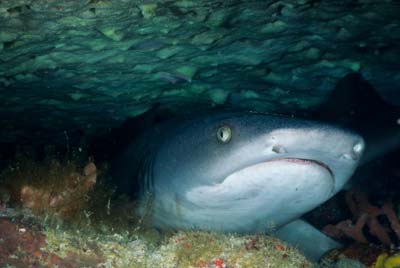 This nurse shark waits for dinner to swim by. There have been only 49 incidents of nurse shark attacks in 500 years. 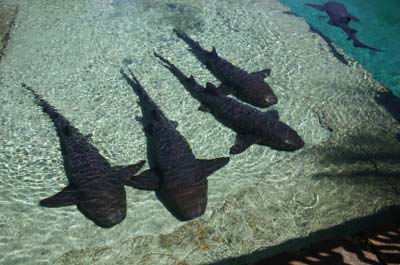 The nurse shark is a very benign shark, but because of that people try to handle the shark and that often results in bites.