Swordfish Are the Natural-born Gladiators of the Sea 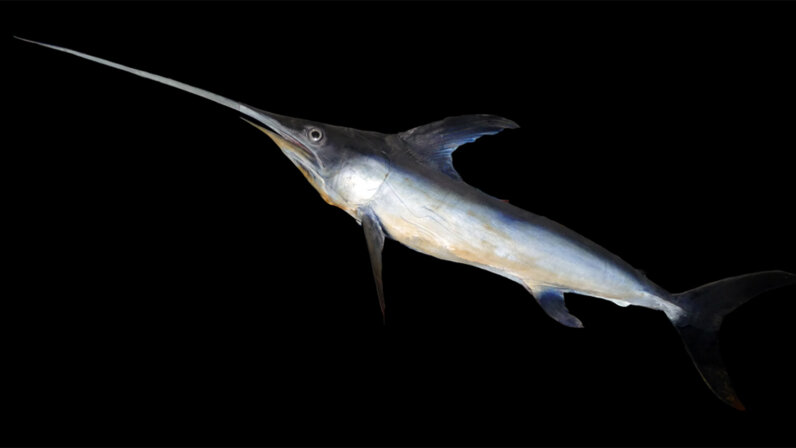 The swordfish (Xiphias gladius) is not eaten by any animal in the ocean other than large-toothed whales and some open-ocean shark species. Citron/CC-BY-SA-3.0

Some animals just look weird — and by weird, I just mean differently proportioned than we're used to. Take narwhals, axolotls, aye ayes, goblin sharks, long-wattled umbrella birds — all of them have something about them that makes us do a double take. But the thing is, evolution's got a reason for nearly everything it does, so if it gave a swordfish a meter-long (3.2 feet-long) saber at the end of its face, you'd better believe there was a reason for it.

The swordfish (Xiphias gladius) is a species of billfish — a group of predatory pelagic fish (meaning they live in the upper layers of the open ocean) that includes sailfish, marlin and spearfish. Swordfish can grow up to 14 feet (4 meters) in length and weigh up to 1,200 pounds (635 kilograms) and they're extremely athletic, partly because their gills have a ton of surface area and can absorb more oxygen at once than many fish. There is only one species of swordfish, though different populations occupy different corners of the world's oceans. Aside from that, they're unique, even among their billfish cousins, in a couple ways. For starters, they inhabit the widest temperature range of any billfish:

"Swordfish can be found from the surface, where they often bask and expose their fins in the air, to depths greater than 3,280 feet [1,000 meters]," says swordfish researcher Chugey Sepulveda, director and senior scientist at the Pfleger Institute of Environmental Research (PIER) in Oceanside, California, in an email interview. "During the daylight hours swordfish can remain up to 12 consistent hours in the dark at temperatures as low as 41 degrees F (5 degrees C). At night they are usually found in the warm surface waters. Swordfish repeat this cycle day in and day out, a strategy that allows them to pretty much forage around the clock."

But more notably, swordfish differ from other billfish in their physiology: none of their other cousins has a rostrum — basically a protruding upper jawbone — that's as long. A swordfish's bill looks delicate, and yet is comparable in strength to a horse's bones, and not easily broken. But why do they need this crazy face contraption? For hunting, of course.

Gladiators of the Sea

"Swordfish use their sword extensively in the pursuit and acquisition of prey," says Sepulveda. "While feeding, swordfish commonly slash at their prey first, immobilizing or stunning the prey item before swallowing it whole."

Swordfish are aggressive, powerful, fast, strong — everything a top predator needs to be. But they've also got some special traits that make them especially effective at hunting in the open ocean. For one thing, their eyesight is exceptionally good — they can see well enough to forage both at night and in the very low light conditions of deep ocean waters during the day. This allows them to follow prey anywhere it goes — horizontally or vertically in the water column.

Swordfish also have regional endothermy, an adaptation in pelagic fishes that allows them to elevate and maintain the temperature of certain parts of their body several degrees above the ambient water temperature. This means they can keep the temperature higher in the parts of their body that need to remain very active, even in very cold waters — their eyes, brains and the muscles responsible for sustained swimming, for instance. By doing this, swordfish remain ferocious fighting machines, even at low temperatures that might begin to hamper their prey, plus they can handle temperature changes of more than 27 degrees F (15 degrees C) within a matter of minutes. Other predatory fish like tuna and some shark species exhibit a much greater capacity for regional muscle endothermy than swordfish, but they can't sustain such long, fast dives down the water column.

And finally, swordfish are capable of extensive migrations — up to 3,100 miles (5,000 kilometers) one way, with a return trip the next year to the same exact location.

"Swordfish migrations can span from the equator to very high latitudes (50°N and 50°S)," says Sepulveda. "These long migrations coupled with extreme temperature tolerance enable swordfish to extend into some of the most productive habitats on earth. It is not common for pelagic fish to tolerate temperature changes in excess of 36 degrees F [20 degrees C] on a daily basis. New tag technology is helping researchers document these movements for the very first time. Our recent data are helping us realize how truly amazing these predators are."

Aristotle first described the swordfish 2,400 years ago, naming it for both the Greek and Roman words for "sword": "xiphias" and "gladius."

The 10 Most Dangerous Sharks
How Sharks Work
How Could a Human Race a Shark?