The world needs pollinators. Without the world's bees, birds, bats, butterflies and even crustaceans that selflessly do the tedious work of spreading pollen from one plant to another, most crops we depend on for food couldn't produce fruit. In fact, researchers estimate that bees alone are responsible for about one in every three bites of food you take.

It's also not uncommon for a certain plant species to require the services of a very specific pollinating animal to help it reproduce. Of course, we know plenty about the pollinator partnerships that involve crops we grow, but in natural ecosystems, many of these relationships remain mysterious.

New research published in the journal Zootaxa reports the discovery of nine new species of diminutive, colorful North American bees responsible for pollinating desert plants from the genus Tiquilia — commonly called crinklemats. Strangely enough, the males of two of these bee species look an awful lot like ants, but the females don't.

"It's unclear why these males have this unique form, but it could indicate they spend a lot of time in the nest," says study author Zach Portman, a Utah State University entomologist, in a press release. "We may find more information as we learn more about their nesting biology."

The newly discovered bees all belong to the genus Perdita, a group of bees first discovered by pioneering 20th-century entomologist Phillip Hunter Timberlake, who described 800 species of bees in his impressive 70-year career. The new species have been named for Shakespearean characters, like Perdita titania, named after the fairy queen in "A Midsummer Night's Dream."

Fairy-like as they are, these teensy bees are no night workers; native to Mexico and the Southwestern U.S. and Mexico, the female bees often work collecting pollen from tiny crinklemat blossoms in the hottest, brightest parts of the desert day, possibly in order to avoid predators. Once they've collected a big stash of pollen, they lay their eggs on top of it and trust their offspring will figure out what to do once they hatch.

"Although identifying Perdita and finding the bees' nests is challenging, these bees have a lot to tell us about adaptation to a harsh and inhospitable environment," says Portman.

The discovery of these bees come with its share of mystery. Aside from the questions surrounding the extreme differences in morphology between males and females, researchers wonder what's up with the colorful spots and stripes on their backs — is it camouflage, or are they mimicking something? They also have strange little baskets on their heads made of stiff hair, possibly for the purpose of collecting pollen — but at this point, who can say for sure?

Now That's Interesting
In 2016, the U.S. Fish and Wildlife Service protected seven species of Hawaiian bees, making them the first bees ever granted endangered status under the Endangered Species Act.

Why a Massive Zika Outbreak in the United States Is Unlikely

Unveiled at CES: The Electric Car Hoping to Beat Tesla at Its Game 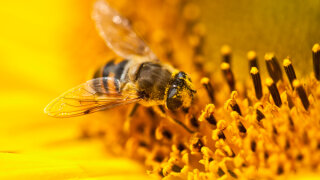 Stuff You Should Know: How Pollen Works [AUDIO PODCAST]

You Should Probably Start Keeping Live Bees as Artwork

The Ultimate How Bees Work Quiz 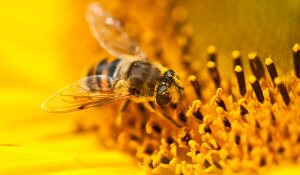 Stuff You Should Know: How Pollen Works [AUDIO PODCAST]

You Should Probably Start Keeping Live Bees as Artwork