Getting Rid of Bedbugs 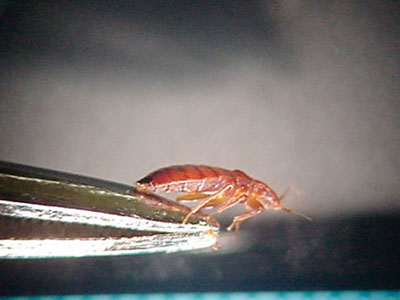 This guy can't get enough of your blood.
Photo courtesy CDC

Cimex lectularius range in color from tan to orangish-brown. They have no wings; they can only crawl from surface to surface. If you find bedbugs hiding, say, behind a picture frame, they'll scurry quickly to another hiding place -- they're quick, agile and adaptable.

There are a few known possible causes of bedbug infestation, including picking up the bugs while traveling and carrying them home in or on a suitcase or clothing, or bringing in a piece of used furniture that has bedbugs already living inside it. Also, if the apartment next to you has bedbugs, any wiring holes or cracks in the walls can let them into your home, too. Adult bedbugs can live up to a year without a meal, so there's no guarantee that the new apartment you move into that's been vacant for six months will be free of the little guys. Having bedbugs isn't about filth -- bedbugs feed on blood, not trash. The most immaculate home can end up with bedbugs. However, a messy home does offer more places for bedbugs to hide, so cleaning up the clutter is one of the first steps to getting rid of a bedbug problem.

The first step is to confirm that what you have in your home are actually bedbugs. Their bites look a lot like mosquito bites, so you (or an insect -finding professional) actually need to find one of the offending bugs and compare it to a clear picture of a bedbug before you start planning for eradication. Another positive finding is rust-colored bedbug droppings and molted shells in the creases of your sheets, the seams of your mattress or wherever the bugs are calling home.

Once you know that you have bedbugs, the eradication process begins. Getting rid of bedbugs isn't simple, and you'll almost definitely want to call a professional pest killer, preferably one with experience in dealing with bedbugs. These insects are tiny and wily, and the most effective pesticides against them are no longer deemed safe, so exterminators must use a combination of less effective options in order to successfully rid your home of the little parasites. A few of the treatments for bedbugs include:

Traditional baits and traps won't work on this type of bug, so clearing your house of the infestation will require effort. You don't necessarily have to get rid of your bed or couch if that's where they've decided to call home, since heat or suffocation might get rid of the problem. But discarding those items might be the way to go if you actually want your home free of bedbugs, not just free of live bedbugs. If you do get rid of infested furniture, don't just put it on the curb where anyone with a pickup could grab your pretty couch and end up with his or her own bedbug problem. It's best to put it in a dumpster or at least deface it in a way that will stop people from wanting to take it home.

To learn more about bedbugs and other related topics, check out the links below.