Browse the article What's the difference between bees and wasps? 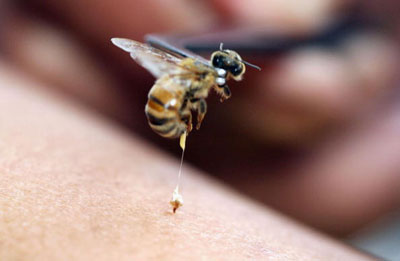 You're on a summer picnic, lounging in the sun with your eyes closed after eating your turkey sandwich. Something buzzes by your ear. You lazily swat at the sound and then -- ouch! -- you feel that familiar, aching sting on your cheek. As your face burns red and swells, the last thing on your mind is whether that pesky, no-good insect was a bee or a wasp.

But we at HowStuffWorks want to know. Was it a bee that stung your cheek, or was it a wasp? What's the difference between these two droning, stinging creatures?

In the preceding scenario, your attacker was most likely a type of wasp. Why? Because wasps are generally more aggressive and likely to stalk public gatherings in search of human food. Bees are more mild-mannered. They focus on the flowers, not your turkey sandwich.

That's just one way to determine whether the attacker was a bee or a wasp. What other characteristics define these two very similar creatures -- both of which belong to the order Hymenoptera? More than 25,000 kinds of each insect exist, but there are several relatively simple ways to distinguish between them.

On the next page you'll learn how physical characteristics, eating habits and nesting sites distinguish the bee from the wasp. You'll also learn which insect can brag about its slender, tapered waist and which one has to live with flat, hairy legs.

Bees and Wasps: Feeding, Nests and the Sting 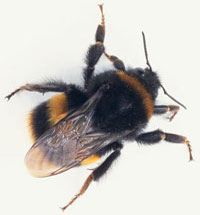 When a bee or a wasp stings you, you're probably not paying attention to the curve of its waist or the shape of its legs. But if you were, you'd notice some key characteristics to help you identify it. While bees have robust, hairy bodies with flat rear legs, wasps' bodies are slender with a narrow waist connecting the thorax and abdomen. (The thorax and abdomen are the names given to an insect's mid and rear segments.) In addition, wasps appear smooth and shiny and have slender legs shaped like cylinders.

The reason for the different body types leads us into another difference between wasps and bees: feeding. Bees are pollinators, spending much of their lives visiting various plants and flowers to gather and distribute pollen. They also feed nectar and pollen to their developing young. Their hairy bodies and flat legs are ideal for holding on to the pollen as they carry it from one area to another.

Wasps, however, are predators. While adults may occasionally feed on nectar or pollen, they feed insects, arthropods, flies and even caterpillars to their young. Their bodies are sleeker and more streamlined for hunting.

If you're lucky enough -- or unlucky, depending on the situation -- to find one of these insects' nests, it will help you in identifying bees and wasps. Bees build their nests out of wax cells that they stack on top of one another. Most honeybee nests are manufactured, but other bees make their homes in tree cavities, buildings or even holes in the ground. A wasp's nest consists of one or more rounded combs made of a papery pulp. The wasp makes this pulp out of chewed-up fibers and its own saliva. Wasps tend to build in hidden, out of the way places, like under decks or in remote crevices.

­The final difference between wasps and bees answers that age-old question: Do they die after they sting you? Both bees and wasps inject their venom with a stinger attached to their bodies. Wasps and most bees can pump the venom into your skin, remove the stinger and then fly away. The honeybee's stinger, however, is barbed and it sticks in your flesh. When the honeybee tries to fly away, her stinger won't budge. Instead, it rips from her body. Since the stinger is attached to the honeybee's digestive system, she eventually dies from the trauma.

On the next page, you'll find some related HowStuffWorks articles along with some interesting links to more information about the many different kinds of bees and wasps that are out there looking for their next victim -- or their next flower.

You might want to think twice before you seek revenge against the insect that stung you: If your attacker was a yellow-jacket wasp or a honeybee and his nest is within 15 feet (4.6 meters), then within 15 seconds of your heinous act, an alarm signal in the form of a scent will reach his buddies. They will hunt you down and sting you many, many more times [source: Koday].