Beetle That Gives Birth to Live Young Discovered in Borneo, Your Nightmares

by Christopher Hassiotis May 20, 2016
A female specimen of the newly discovered Borneostyrax cristatus. Radim Gabri

Three biologists recently set out into the high jungle mountains of the Malaysian part of the island of Borneo. Intent on studying the insect life in a part of the world rich in biodiversity the scientists, from Palacký University in the Czech Republic, discovered a new species of wingless long-horned beetle giving birth to live young — the first of its kind found doing so.

The scientists' research, published in the open-access journal ZooKeys, describes a beetle, given the name Borneostyrax cristatus, displaying an example of ovoviviparous birth.

Ovoviviparous animals employ a rare way of bringing the next generation into the world. This type of animal creates embryos in eggs, but the eggs remain inside the mother's body — the hatching takes place within the genital tract, and the young animals exit the mother's body viably alive.

This is opposed to animals that give birth by viviparous or oviparous methods.

Ovoviviparous birth is much less common in the animal world, but you'll find it among sharks, snakes, manta rays, insects and some frogs and toads. Borneostyrax crystatus is the first confirmed ovoviviparous birther in the family of long-horned beetles, which comprises about 35,000 species and is the world's fifth-largest beetle family. And although the B. crystatus isn't the first beetle to give birth like this — the Pseudomorpha genus of ground and leaf beetles does, too —  it is extremely rare in the world's overall beetle population.

"During a dissection of female genitalia in specimens belonging to the one of the newly described genera, named Borneostyrax, we found out that two females contained large larvae inside their bodies," says lead researcher and Ph.D. student Radim Gabriš in a press release announcing the find. "This phenomenon have been known in a few lineages of the related leaf beetles, but this is the first case for the long-horned beetles."

The authors of the findings say, though, that the reproduction of most long-horned beetle species hasn't been studied, so it may be more widespread throughout the family. 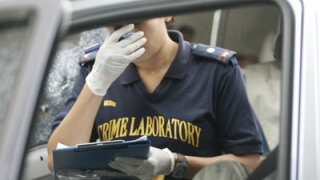 What do bugs have to do with forensic science?