Browse the article Where do butterflies get their striking colors? 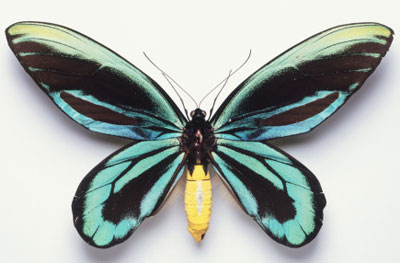 The vibrant, blue wings of this Queen Alexandra's birdwing make it easy to spot, especially since it has an 11-inch wingspan. See more insect pictures.
Colin Keates/Dorling Kindersley/Getty Images

Butterflies possess some of the most striking color displays found in nature. As they fly from flower to flower gathering nectar, their brightly colored wings seem to shimmer and change colors before your eyes. Pilots flying above the rainforest can see the bright blues of the morpho butterfly of South America up to half a mile away [source: Vukusic]. A butterfly's rich color can act as camouflage, mate attraction and warning signal.

But what is it that makes the vivid colors of butterfly wings appear to dance? How can they possess such intense hues?

Butterflies actually get their colors from two different sources: ordinary (or pigmented) color and structural color. The ordinary color comes from normal chemical pigments that absorb certain wavelengths of light and reflect others. For example, the pigment chlorophyll colors plants green. The chlorophyll soaks up the blue and red colors of the spectrum, but not the green, which you see when it bounces back to your eye. Most butterflies get their different shades of brown and yellow from melanin, the same pigment that makes you tan in summer and gives some people freckles.

The structural color of butterflies is where things get interesting. This type of color stems from the specific structure of the butterflies' wings and explains why some of a butterfly's colors seem to shift and appear so intense. This quality of changing colors as you, the observer, moves is known as iridescence, and it occurs more in nature than you might think. Mother of pearl seashells, fish and peacocks are just a few examples of animals with this quality, but it is most pronounced in the butterfly family. It happens when light passes through a transparent, multilayered surface and is reflected more than once. The multiple reflections compound one another and intensify colors.

Learn how the qualities of iridescence and the structure of a butterfly's wings join forces to create such awesome effects on the next page.

Constructive interference amplifies the colors of a butterfly's wings.
HowStuffWorks

When talking about iridescence, it helps to remember that light is a wave and can be described as a wavelength: the distance between identical points on the wave. Waves can also be described by their phase: the position of their crests (high points) and troughs (low points). When two waves have the same phase, their crests and troughs would align if placed on top of one another.

Whether you know it or not, you have likely been familiar with iridescence since you were a kid. You probably marveled at it while blowing bubbles with a wand or playing with bubbles in the bathtub. With a soap bubble, light first passes through the top layer of the bubble, where some of it is reflected, while some light continues through to the bottom layer, where again some of it is reflected. Depending on the time it takes the second reflection to join the first and several other factors, the two waves may or may not line up, or have the same phase. If the phase of the two waves is different by some multiple of one full wavelength, the two waves are said to have constructive interference. If the two waves differ by half a wavelength or an odd multiple of that, they have destructive interference.

Constructive interference is what happens in iridescence. It causes the two waves to complement each other and strengthen the reflection. The effects of iridescence create much more intense colors than ordinary pigments ever could. Destructive interference causes the two waves to cancel each other out and weaken the reflection, or destroy it altogether. Basically, when the crests and troughs of more than one wave of light match up, their powers are magnified. When they do not match up, they are mostly destroyed.

OK, you're saying, but butterfly wings look nothing like soap bubbles. So how do they do it? Continue reading to find out how iridescence plays out in butterfly wings.

Wash that White Right Out of Your Hair

Not all white coloring is created from pigment; some of it is actually just bubbles of air that scatter light because of their transparency. The scattering of light makes the object appear white in the same way that snow does. The white hair of humans is similar. The individual strands are not actually pigmented white but are filled with tiny air bubbles that replace the ordinary color. 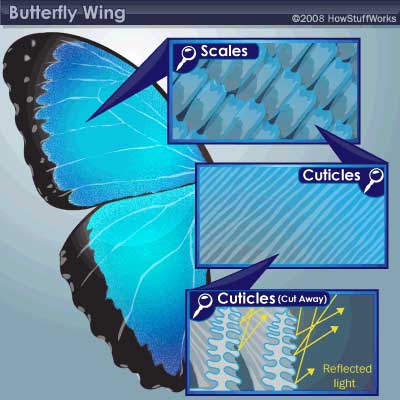 When light hits the different layers of a butterfly wing, it is reflected numerous times. The combination of all these reflections causes the intense colors of many species.

The same principle behind soap bubbles applies to butterfly wings. Their wings, however, amplify the effects of iridescence because they have many more layers for the light to pass through and thus many more opportunities for the light waves to reflect and magnify one another.

As small as they are, butterfly wings are covered by thousands of microscopic scales, split into two to three layers -- thus their Greek order name, Lepidoptera, meaning scaled wings. In turn, each scale has multiple layers separated by air. Rather than having just the constructive interference from the top and bottom layer that you have in a bubble, the many, equally spaced layers of butterfly wings create multiple instances of constructive interference.

When light hits the different layers of the butterfly wing, it is reflected numerous times, and the combination of all these reflections causes the very intense colors that you see in many species. Some butterfly displays even extend into the ultraviolet spectrum, which is visible to butterflies but not to humans. This ability to detect ultraviolet light guides monarch butterflies on their annual migration from North America to Mexico.

The combination of a butterfly's structural and pigmented color can create interesting effects. For example, if you saw a butterfly with yellow pigment underneath a structure that creates a blue iridescent color, you might see a green shade, made by the merging of the two colors. Or depending on your viewpoint, you might see blue, yellow, green or a combination of the three. Your view would change as the butterfly moves its wings and the light enters at different angles.

Butterfly wings come in a variety of colors and patterns.
© iStockphoto.com/Ismael Montero Verdu

Whether they serve as camouflage or communication, the brilliant, complex wings of painted ladies, red-spotted purples and the thousands of other butterfly species owe their beauty to iridescence and structural color.

For more information on butterflies and iridescence, visit the links on the next page.