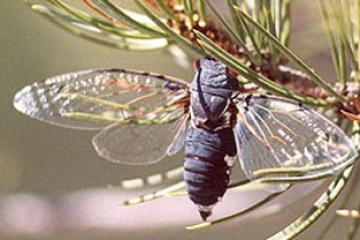 The cicada's claim to fame (in case you literally haven't heard it) is its singing. The high-pitched song is actually a mating call belted out by males. Each species has its own distinctive song that only attracts females of its own kind. This allows several different species to coexist.

Cicadas are the only insects capable of producing such a unique and loud sound. Some larger species can produce a call in excess of 120 decibels at close range. This is approaching the pain threshold of the human ear! Smaller species sing in such a high pitch that it can't be heard by humans, but it may cause dogs and other animals to howl in pain.

The apparatus used by cicadas for singing is complex. The organs that produce sound are called tymbals. This pair of ribbed membranes sits at the base of the abdomen. The cicada sings by contracting the internal tymbal muscles. This causes the membranes to buckle inward, producing a distinct sound. When these muscles relax, the tymbals pop back to their original position. Scientists still don't fully understand how this apparatus produces such extreme volume.

Cicadas usually sing during the heat of the day. In addition to attracting a mate, the loud noise actually repels birds. The cicada's song is painful to the birds' ears and interferes with their communication, making it difficult for the birds to hunt in groups. Male cicadas in the same brood will stick together when calling in order to increase the total volume of noise. This reduces the chances of bird predation for the whole brood.

Even cicadas must protect themselves from the volume of their own singing. Both male and female cicadas have a pair of large, mirror-like membranes called the tympana, which function as ears. The tympana are connected to an auditory organ by a short tendon. When a male sings, the tendon retracts, creasing the tympana so that it won't be damaged by the sound.