Browse the article Do female praying mantises decapitate their mates? 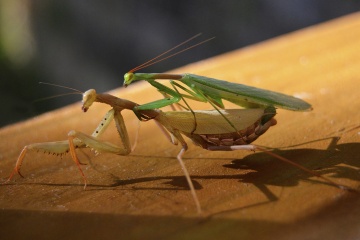 Sexual reproduction can be pretty grimy for different species, but do praying mantis females really decapitate their mates after the deed?
kershawj/Thinkstock

It's long been an excitedly repeated myth that female praying mantises have no problem engaging in violent, cannibalistic murder when confronted with a friendly mate. Perhaps because school classrooms often host terrariums with mantis subjects, it's one of those rumors that even children seem to know: Don't breed with a female mantis, lest your head becomes her dinner.

Sounds scary, but is it true? Do the females of the species actually eat or decapitate their mates, or are they simply being maligned by alarmed men who perhaps empathize a little too much with their insect brethren? The key to answering these questions is the word "species." Because while we might have a picture of a standard-looking mantis in our head -- green, stick-like, and bent in supplication -- there are actually 2,400 species of the sucker [source: Otte]. Some are colorful, some are creepy, and some -- yes, some -- are cannibals. But before we get into the occasionally cruel lifestyle of the female mantis, let's take a second to examine the basis of the maybe-myth.

What we discover is that the myth is actually well-documented science. In an 1886 observation from the journal "Science," entomologist Leland Ossian Howard noted that on placing a male mantis with a female, the female systematically proceeded to eat the male's left leg, left eye and right leg, and then decapitate and eat his head. The male, keep in mind, was attempting to mate with her the whole time -- which she eventually acquiesced to, with her headless and mostly legless partner. While Howard stressed that he'd never seen it before, he also rather breathlessly stated, "It seems to be only by accident that a male ever escapes alive from the embraces of his partner" [source: Howard].

See how this could make everyone think that mantis women were nothing but bloodthirsty harpies? But remember: Howard saw this once, with one species of mantis (Mantis carolina). However, decapitation or cannibalism also went on to be observed in Mantis religiosa as well, and a few other scientists studied the question of why decapitation would be useful for mating. Some theories? The decapitation causes sexual movements in the male abdomen, or perhaps a part of the thorax might actually inhibit sexual movements. Both theories were later proved false [source: Crew].

So here's the real deal: Female mantises have occasionally been observed to cannibalize and decapitate their mates. But by and large? Doesn't seem to be the case. A 1984 study in "Animal Behavior" mated 40 pairs of mantises; only one was decapitated in almost 70 encounters [source: Liskë].

Bottom line? You can stop with the cliché female mantis jokes. Dating is hard enough; nobody needs a reputation as a man-eater.