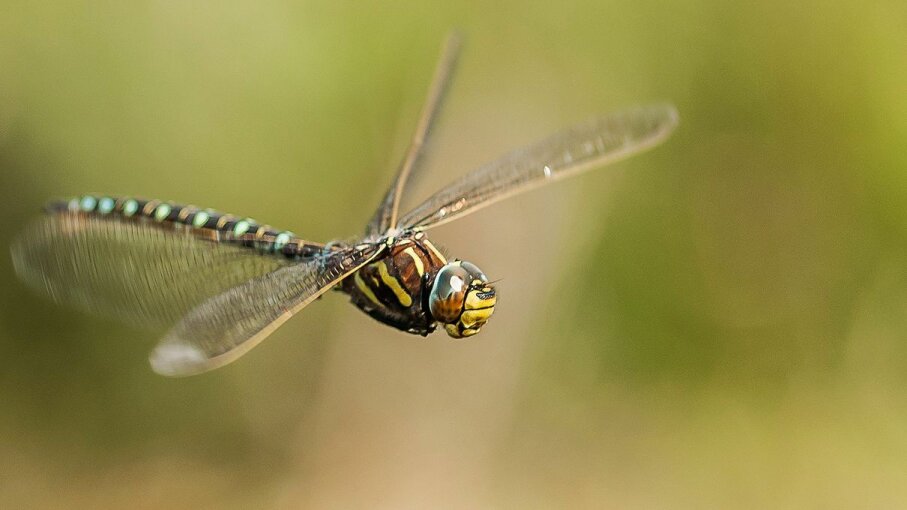 Instead of passing along a fake phone number to an unwanted but persistent suitor, ladies, perhaps look to the natural world for strategic inspiration. Many animals play dead in order to avoid predators, but some female dragonflies pretend to be deceased in order to avoid the amorous advances of males.

A new study published in the journal Ecology reports that after the female moorland hawker dragonfly (Aeshna juncea) has mated, her first line of defense is to just hightail it away from any other males and find a nice, secluded place to lay her eggs so she can call it a day. But sometimes it's not that easy, and she has to resort to staging her own death.

Rassim Khelifa was studying the effects of climate change on moorland hawker dragonfly eggs in the Swiss Alps as a Ph.D. student in the Department of Evolutionary Biology and Environmental Studies at the University of Zurich. That's when he stumbled upon this interesting bit of insect thanatosis. In order to collect the eggs for his research, Khelifa had to track the female dragonflies after they mated, and realized that sometimes, when receiving aggressive and unwanted advances from a male, a female dragonfly would sputter to a stop in midair, take a nosedive, and crash into the weeds. Of the 35 female dragonflies he followed in two different ponds, Khelifa observed 27 of them performing this death feint, which was successful in putting the male off about 60 percent of the time. When the coast was clear, the females flew away.

It seems like an unnecessarily dangerous strategy to avoid getting hit on, but male dragonflies are unbelievably aggressive around mating time, and a harassed female can end up injured or drowned trying to escape these maniacs. The unusual thing about the moorland hawker is that, unlike most other dragonfly species, the males don't act as bodyguards for the females after they've mated, covering her while she finds a nice, secluded place to deposit her eggs. Instead, the moorland hawker males fly off directly after mating, leaving females to fend for themselves. Totally rude. No wonder the females resort to subterfuge.