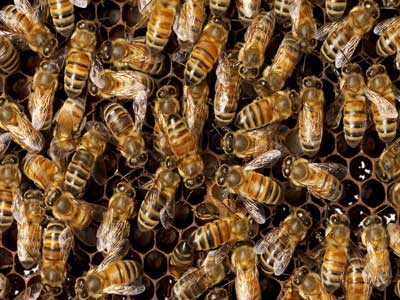 The honeybee waggle transforms the chaos of the hive into a well-oiled, nectar-finding machine.
Don Farrall/Getty Images

In 1973, Karl von Frisch won the Nobel Prize for the discovery of one of the most primitive dances in history. It wasn't the waltz, the samba or the tango, nor any human contrived set of steps. Instead, the scientist introduced the world to the fascinating rhythm of the waggle.

The waggle is a dance performed by honeybees that stimulates honey production and sustains the viability of the hives. It's an intricate, yet simple to follow, pattern of movement that scouting honeybees practice in order to direct forager bees to sources of nectar around 330 feet (100 meters) or more away from the hive [source: Winston]. The forager bees can then find the nectar and bring it back to the hive to make honey.

Although von Frisch's general description of the waggle as a step between scouting out nectar sources and making honey was accepted by many scientists, the precision of the information involved in the dance wasn't confirmed until recently. In 2005, an experiment tracked foraging honeybee's flight patterns and confirmed that the unique "language" of the waggle does in fact include directional data that the bees interpret and follow [source: Riley et al]. Those instructions communicated by the waggle, in addition to the scent of the nectar, have a 90 to 98 percent accuracy rate for the foraging bees [source: Winston].

When you watch a swarm of honeybees in the hive, they buzz around in such a frenzied manner that you could easily the miss the simple figure-eight movement of the waggling honeybee scout. But before the scouting bee can start to waggle, it must first leave the hive to locate prime nectar sources from flowering plants, then rush back to the hive to recruit help from foraging bees. To draft the other bees, it must give them instructions of where to go.

Those instructions work efficiently enough that researchers have attempted to apply its principles to the human world. One prime example that has attracted attention is intended to make Web servers more efficient -- like a happy hive of honeybees.

The Waggle and the Web: Honeybee Technology 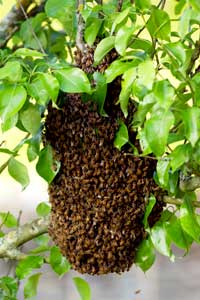 What does this swarm of honeybees have in common with Web servers?
TG Stock/Contributor/Tim Graham/Getty Images

When people translate patterns found in the natural world into real world applications, we refer to it as biomimicry. Because the honeybee waggle maintains honey production effectively, researchers have examined different ways that those principles in the hives can make our lives easier as well. In 2006, engineers at Cardiff University in Wales derived a mathematical algorithm for the waggle. Using that algorithm, they programmed machines in a factory to self-adjust for more efficiency.

The waggle mostly consists of a figure-eight shaped movement the scouting bees dance out while furiously shaking their abdomens. They move so rapidly during the waggle that they vibrate their bodies back and forth up to 15 times per seconds [source: Winston]. The information about the location of the nectar site is contained within the nuances of the individual waggle steps. For instance, when a scouting bee waggles, the number of loops it completes indicates the distance of the nectar from the hive. The angle that it waggles in relationship to the honeycomb also tells the foraging bees the direction to fly to reach the nectar site.

­As the nectar at one site begins to run low, the waggling at the hive dies down accordingly. That, in turn, reduces the numbers of foraging bees flying to that site. They can then shift their focus to other nectar sites scouting bees have found without wasting energy.

To get an idea of the economy of the waggle dance, think about a set of elevators in a bustling office building. The mechanical operating system is like the scouting bee that directs the traffic, and the elevators are the foraging bees that fetch the passengers. In the middle of the day, the wait time for an elevator will be minimal. But when there's a high demand with many people on multiple floors pressing buttons, the wait increases along with the travel time on the elevator. Theoretically, if there were a central control (akin to the scouting bee waggle) that could cluster elevator trips according to destination, it would streamline the operations and cause less wear and tear on the elevators.

A professor at the Georgia Institute of Technology, Craig Tovey, took a cue from the waggle to ramp the efficiency of Web servers. Web servers manage a specific number of sites or clients online. They work best under normal operating conditions, but tend to crash during high traffic spikes. To resolve that issue, Tovey compared the Web servers' limited scope and capabilities to bees in a hive. The Web sites, or clients, he likened to the nectar locations. In order for the server to adequately manage a site during those spikes, Tovey realized that the network of Web servers needed to be able to shift their operations to the high-demand sites to prevent crashing.

To do that, Tovey and his colleague Sunil Nakrani created a platform within a network of servers that functioned as the waggle dance floor [source: Georgia Tech]. If a Web site experienced a user surge, a message went to the "dance floor" to attract other servers to help maintain the popular site. Like the waggle, the length of time the request remained on the platform indicated the traffic volume and potential profitability of that Web site [source: Georgia Tech].

In tests Tovey and Nakrani have performed on their model, server efficiency has increased 4 to 25 percent. According to those results, if the honeybee technology takes off, it could certainly sweeten the Internet experience.