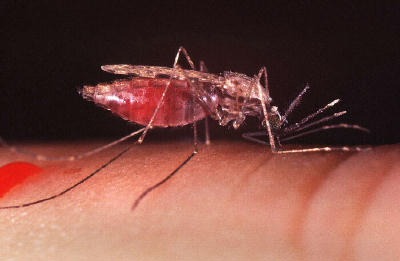 As mentioned before, only female mosquitoes bite. They are attracted by several things, including heat (infrared light), light, perspiration, body odor, lactic acid and carbon dioxide. The female lands on your skin and sticks her proboscis into you (the proboscis is very sharp and thin, so you may not feel it going in). Her saliva contains proteins (anticoagulants) that prevent your blood from clotting. She sucks your blood into her abdomen (about 5 microliters per serving for an Aedes aegypti mosquito).

If she is disturbed, she will fly away. Otherwise, she will remain until she has a full abdomen. If you were to cut the sensory nerve to her abdomen, she would keep sucking until she burst.

After she has bitten you, some saliva remains in the wound. The proteins from the saliva evoke an immune response from your body. The area swells (the bump around the bite area is called a wheal), and you itch, a response provoked by the saliva. Eventually, the swelling goes away, but the itch remains until your immune cells break down the saliva proteins.

To treat mosquito bites, you should wash them with mild soap and water. Try to avoid scratching the bite area, even though it itches. Some anti-itch medicines such as Calamine lotion or ­over-the-counter cortisone creams may relieve the itching. Typically, you do not need to seek medical attention (unless you feel dizzy or nauseated, which may indicate a severe allergic reaction to the bite).

Mosquitoes can carry many types of diseases that are caused by bacteria, parasites or viruses. These diseases include:

We'll look at ways to reduce mosquito populations in the next section.

The human immunodeficiency virus (HIV) that causes AIDS cannot survive in a mosquito, and therefore cannot be transmitted from one person to another through mosquito bites.