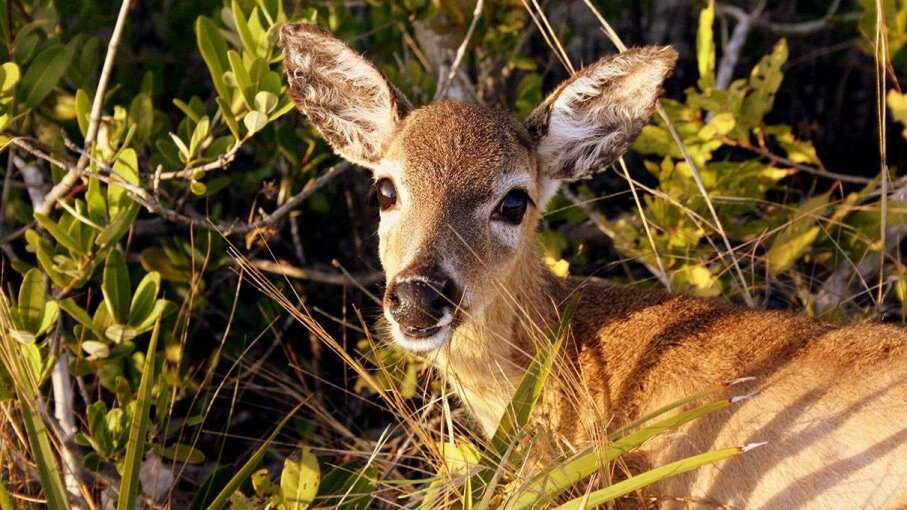 In the 1950s, fewer than 30 Key deer existed. Today their population numbers close to 1000, but a flesh-eating maggot is threatening the endangered species. Elizabeth Weller/Flickr

Halloween's coming, so don't let the season of the disgusting and macabre pass you by without educating yourself about this winner: There's something called a flesh-eating killer screwworm causing a kerfuffle in Florida.

Florida, bless its heart, has lately been a magnet for nuisance weather and viruses. And that's on top of perennial Florida problems like rogue pythons, manatee-riding tourists, invading Nile crocodiles and  xenophobic preachers. But last month the state's agriculture commissioner Adam Putnam declared an agricultural state of emergency in the county that includes the Florida Keys. The reason? It's all due to the proliferation of the New World screwworm fly (Cochliomyia hominivorax), which is literally eating the world's last population of endangered Key deer.

Screwworm flies can be found in South America and the Caribbean, but this infestation in the Florida Keys is the first the U.S. has seen in 30 years. This parasitic fly lays its eggs in an open wound or around the mucus membranes of a warm-blooded animal — any mammal will do, thanks very much — and after its maggots hatch, they feed on the flesh of their host until they're large enough to fall to the ground and pupate into adult flies.

The problem is, a single female screwworm fly can lay hundreds of eggs at a time, and the maggots are ravenous; they will happily eat rotting, necrotic flesh and live, healthy flesh alike. An infestation of screwworm fly larvae can be fatal to its host — and a gnarlier, more prolonged and excruciating death would be difficult to imagine.

That's why this infestation in the lower Florida Keys has the government on red alert. While no cases have yet been reported in humans or livestock, the infestation has exploded in the Key deer population. This small, critically endangered deer species has its rutting season in the fall, and this season of increased sexual energy, aggression and mating challenges has left many males with lacerations around the head and neck.

Scientists at the National Key Deer Refuge began noticing a few weeks ago that these injuries weren't healing as they had in past years, and some deer were found dead — or alive, but with with gory, festering lesions. As of last Friday, nearly 10 percent of the remaining Key deer — 83 deer of the herd of just 800 to 1,000 animals — had either died from their wounds or been euthanized. Experts are unsure if the species will be able to survive this infestation.

While a screwworm fly maggot would love to get its mouthparts on you or your pets, the clean and well-cared-for mammals in your house don't have much to worry about — a trained medical professional can treat them pretty easily.

How are we keeping the flesh-eating screwworm from spreading? At this point, anyone with pets or livestock driving north of mile marker 109 at Key Largo must stop to have their animals inspected. Happy Halloween, everybody!

Now That's Interesting
In 2013, a British tourist reported a weird scratching noise inside her head. Doctors initially wrote it off as an ear infection, but later realized that she'd been infected by screwworms on a recent trip to Peru, and they were living in and living off of her ear.