Synchronized Fireflies Perform a Light Show Like No Other 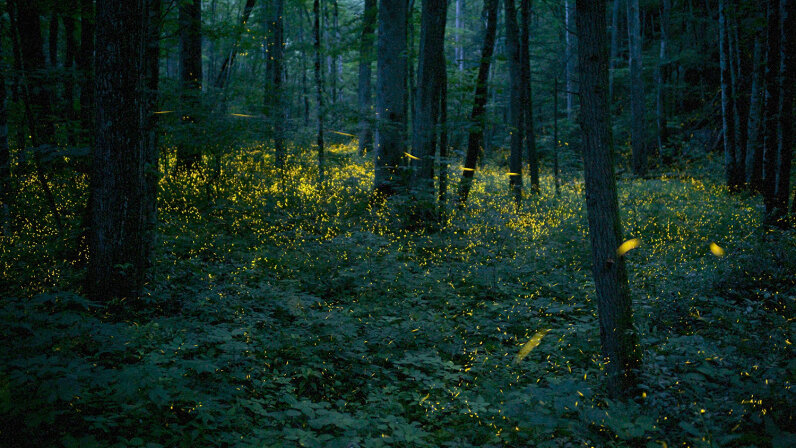 Photinus carolinus, pictured here at Great Smoky Mountains National Park, is the only firefly species in North America that has its choreography together. Floris Van Breugel/Nature Picture Library/Getty Images

We know why fireflies do their firefly blinky thing. It's simple, really. It's the same reason males of many species show off. It's why "Friends" stud Joey Tribbiani — dated reference, but you'll get it — unleashed his famous pickup line: "How YOU doin'?"

It's a mating thing.

We don't know, precisely, how a few blinks in the middle of a crowded forest, or even a suburban backyard, eventually end in a nocturnal hookup. Nor do we know exactly how a female firefly, often on the ground or in the bushes or in a tree, leads her little blinking beau to their eventual love nest.

We're still trying to figure out, too, how some species of firefly can pull off their light show in synchronicity. It happens, in the Great Smoky Mountains and a few other places every summer. Hundreds or thousands of fireflies light up at the same time in the same pattern in one, huge choreographed How YOU Doin.'

"It's a pretty magical experience," says Jamie Sanders, a spokesperson with the Great Smoky Mountains National Park in Tennessee.

Every year, for a couple weeks in late May or early June, the park sponsors viewings of a certain species of synchronous firefly, Photinus carolinus. It's one of about 19 species of fireflies in the park but the only one in North America that has its choreography together.

The viewings are a hot ticket. This year, the park got nearly 18,500 applications for 1,800 parking spots for the show.

The lucky few park their RVs and their minivans near a campground, are herded onto a shuttle, disembark and then wind their way on a walking path deep into the woods. As night falls, they are told to cover their flashlights with red or blue cellophane and point them toward the ground. When you rely on lights to find your mate, as fireflies do, you don't need a bunch of flash-toting humans getting in your business. When the time comes, it's lights off for everybody but the stars of the show.

Some years are better than others, depending on a lot of factors. The phase of the moon, for one. (Again, the light.) The weather. Because firefly larvae live in the ground for one to two years, moisture is big. There was a drought in much of the Great Smoky Mountains last fall, Sanders reports, so this year's show was not as vivid as those of years past.

But when the fireflies show, and when Photinus carolinus begins its timed blink-blink-blink, visitors are treated to something seen in only a few places in the world.

"The first thing you notice is just how many of them there are," says Andy Moiseff, a University of Connecticut professor and scientist who studies the neural mechanisms behind the fireflies' flashing. "When you go to one of these areas where it's very rich in these animals, it's amazing. You just see them everywhere."

At first glance, the synchronicity may not be apparent. That might be, Moiseff says, because other species who don't have their rhythms together are often present. It also can be because the members of P. carolinus aren't yet on beat.

But sooner or later, the lightning bugs — that term is OK, too — get in a groove and begin flashing in patterns. Hundreds at a time. Sometimes more. That shows females of the species exactly who's up there and prompts them to flash their own response, a kind of attractor beam for males. The females don't, after all, want to come on to another species — or a stray flashlight.

How the males get their synchronous act down — how it starts, how hundreds of males learn the duration and rhythm of the blinks — is still a mystery. But Moiseff likens it to a group of people walking down a street. Starting out is sometimes rough, finding your spot and your stride in a big pack. But after a bit, the rhythm and the movement become natural.

In this photo, you can see the Eastern firefly (Photinus pyralis) flying. P. pyralis is another one of the firefly species that visitors may encounter at the Great Smoky Mountains National Park. It's not synchronous like P. carolinus.
ivkuzmin/iStock/Thinkstock

What's also amazing about the show, as Sanders notes, is when it's over. The little buggers — they're actually beetles — time that, too.

"The coolness to me is that they all just shut off at the same time, You have this complete moment of sheer darkness," she says. "It's ... magical."

Getting to see the beauty of synchronous fireflies is a rarity. But fireflies themselves aren't rare. There are some 2,000 species in the world. To many, they're a symbol of summer. Catching lightning bugs in a jar remains a beautiful childhood memory to millions.

"It's still a great thing. But let 'em go the next day," Moiseff advises. "One of the great things about doing what I do; you talk to anybody on a plane, sit on a bus, and it always turns to, 'I'll tell you, when I was a kid ... '

"Anything that gets people into nature, I'm for."

Now That's Interesting
Fireflies are, maybe surprisingly, mostly carnivorous. Larvae feed on snails and worms. And some adult fireflies feed on other species of fireflies. (Which is why, Moiseff says, you shouldn't be surprised if your jar full of fireflies only has one in it the next morning.) But some fireflies may not eat anything. That may not be surprising, considering most adults live only a few weeks.