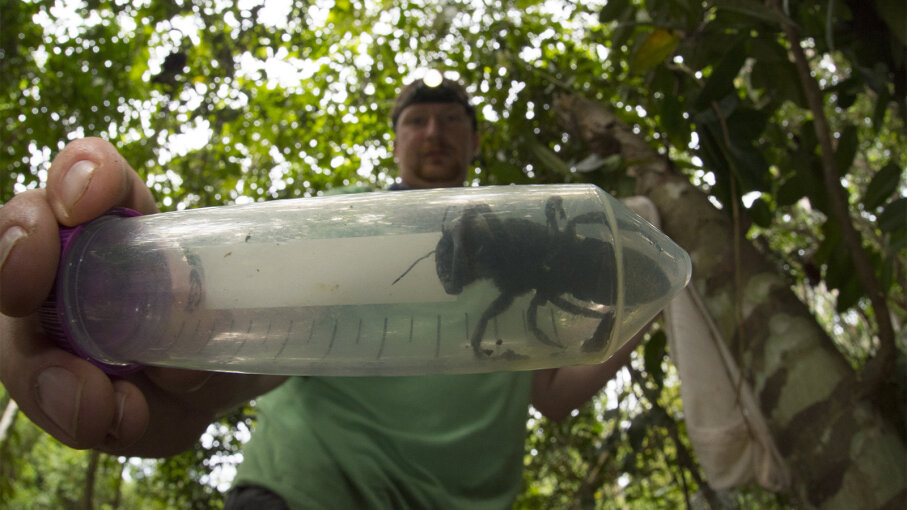 Around 285 million years ago, if you had been walking through a Permian floodplain, you might have seen a griffinfly — a dragonfly-like insect the size of a crow. It was huge, partly because atmospheric oxgen during this time was something like 31-35 percent (it's around 21 percent today), and it turns out oxygen is the limiting factor in how big a bug can get.

Although we no longer have dragonflies flying around with 2-foot (0.6-meter) wingspans, there are some standouts among modern insects. Take Wallace's giant bee (Megachile pluto), the world's largest bee, which can grow up to the size of an adult human's thumb — five times the size of the European honeybees you're used to seeing — with large mandibles used for scraping up tree resin to line their nests. It was recently thought to have gone the way of the griffinfly — nobody had seen Wallace's giant bee since 1981, and before that, no scientist had clapped eyes on it since its discovery in 1858 by Alfred Russel Wallace, the English biologist who independently conceived of the theory of evolution through natural selection at the same time as Charles Darwin. Of course, researchers knew this didn't mean it was extinct — it's just very difficult to prove an organism exists if you can't find it alive.

But in January 2019, a team of researchers traveled to a collection of little islands in Indonesia called the North Moluccas, and they found the bee behemoth nesting in a termite nest on a tree trunk.

"To actually see how beautiful and big the species is in life, to hear the sound of its giant wings thrumming as it flew past my head, was just incredible," said Clay Bolt, a natural history photographer who captured the first photos and video of a live giant bee, in a press release.

Over the years, a few research expeditions have set out to find Wallace's giant bee, but they came up empty-handed until now. In the meantime, however, specimens would show up for sale — a specimen showed up on eBay in 2018 that auctioned for $9,100. In case you were wondering, that's more than what the corpse of an insect usually goes for.

The exact island on which the bee was found is a secret because, as you can imagine from the price tag, if the researchers published that information, the remaining Wallace's giant bees might not be long for this world.

Since the bee has only been viewed a few times in the wild, not much is known about its habits and life history, other than that it seems to like to live in termite nests in lowland forest. Indonesia lost 15 percent of its tree cover between between 2001 and 2017 to make way for agricultural fields, so our rekindled romance with Wallace's giant bee might not last long if conservation efforts aren't put in place soon.

But in the meantime, it's nice to know Megachile pluto is still buzzing through the forest like a tiny helicopter. The giant griffinflies of the Permian would have wanted it that way.

Now That's Interesting
Expeditions to search for other lost species are ongoing. For instance, researchers are on the lookout for the Pondicherry shark, the pink-headed duck and the elusive Wellington's solitary coral.