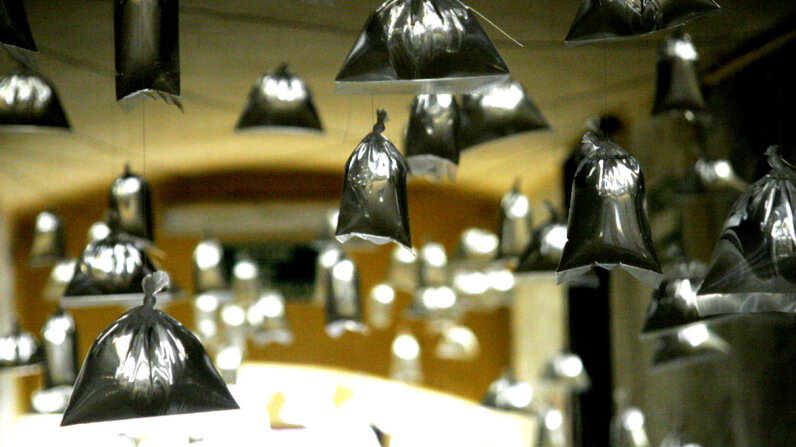 Will all the water bags at this restaurant really protect guests? Matt Murphy/Flickr (CC by 2.0)

Perhaps you've visited a restaurant and seen clear, water-filled bags hanging on the doors or cinched up in the outdoor dining area. You might ask, "What's all this about? Some crazy new way to control temperature? A scheme to save money on water pitchers?"

While any effect on temperature is purely accidental, these hanging bags are all about driving pests away. People hang these bags outside their homes, businesses and even in their barns to drive flies away.

Various takes on the water-bag practice exist. Some advocates insist the bag must have flakes of floating tin foil; others say a penny or two. A couple of industrious websites even offer commercial takes on the concept, selling specially designed water bags to be used as repellents.

After all, flies spend much of their time buzzing around such germ havens as dumpsters and animal carcasses and droppings. Then, loaded down with germs, they swarm around your chicken sandwich — it's only natural that you'd want to keep them away. After all, flies aren't just annoying, they carry diseases.

But how can a bag of water help? Does it even work? Experts and amateurs are split on the question. Let's examine both sides of the issue.

Why Flies and Water Bags Just Can't Get Along

The water bag method of fly repellent has many supporters, from restaurant owners to backyard grill-masters. Many success stories ranging from the mild to the miraculous litter the internet.

So how does the method drive flies away? Some insist the flies perceive the clear liquid as the surface of a body of water. Others claim the insect flies away at the sight of its own magnified reflection. But the most popular reasoning that pops up among entomologists and patent-filing entrepreneurs is simple light refraction.

Refraction takes place when a clear or opaque object, such as a piece of glass or a bag of water, alters the course and velocity of light. The rays of light, which normally travel in a straight line, bend. This effect is responsible for some optical illusions, such as mirages, that occasionally baffle humans as well. For more information on refraction, read How Light Works.

In theory, refraction can be just as confusing for some species of insect, especially the housefly. It boasts a highly sensitive array of eyes that allow it to see in multiple directions at once.

The insect's head mostly consists of a pair of large complex eyes, each of which is composed of 3,000 to 6,000 simple eyes. These eyes can't move or focus on objects like human eyes, but they provide the fly with a mosaic view of the world around them. Each simple eye provides one small piece of the puzzle, much like the way a screen's pixel delivers one detail of the larger picture.

The head of the housefly
HowStuffWorks

A housefly bases its sense of direction on the direction sunlight comes from. Some entomologists suggest that when these complex, sensitive eyes experience refracted light, the insect becomes confused and flies away.

While some supporters claim water bags keep all kinds of flying insects away, most report success with complex-eyed insects, like houseflies.

Not convinced? You're not alone. Let's hear some of the doubts about this optical fly repellent. 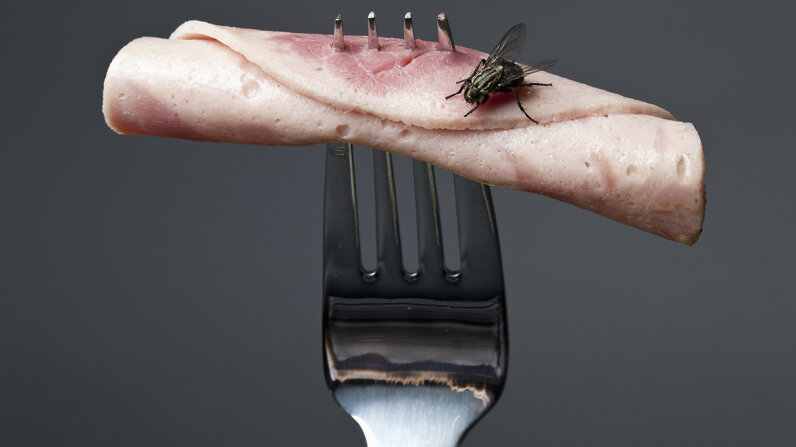 Why would a bag of water deter a housefly from landing on this tasty piece of meat? Robert Recker/Corbis/Getty Images

There are plenty of people who don't think water bags can repel flies. The MythBusters gang, for one, declared this one busted. Other critics often classify this theory in the realm of old wives' tales and modern superstition. They chalk success stories up to confusion between correlation and causation.

Imagine a traveling salesman offers you an irresistible bargain: For only $19.95, he'll give you a belt buckle that can prevent shark attacks. You wear it for a week and, sure enough, no shark bites. Does this mean the magic belt buckle works? Is there an actual correlation between wearing the belt buckle and avoiding sharks? Is one the cause of the other? To properly measure this, you'd have to consider how often sharks attacked you before wearing the buckle, and the various other reasons sharks may be leaving you alone.

If all the factors aren't accounted for, hanging water bags used to repel flies may seem to work due to the placebo effect. In medical terms, this is when people who think they're being treated for a condition feel better, even if that treatment treats nothing at all. The same effect could occur for people who think they are treating a pest problem.

But what if the situation is even worse? What if the placebo exacerbates the problem being treated? When Mike Stringham, professor of entomology at North Carolina State University, investigated the use of clear plastic water bags as a fly deterrent, he encountered just such a situation.

However, the study was not conducted under natural lighting conditions. Its purpose was to determine whether the water bags could be used to decrease fly populations on egg farms. The study didn't explore the possibility that direct sunlight increased the water bags' efficiency.

So do bags of water lower the number of houseflies around homes and restaurants? There are reasonable explanations that argue yes and significant evidence that proves no. Regardless, you can still find water bags hanging near restaurant patios and backyard porches across the globe.

Why are cicadas so noisy?
Why do 17-year cicadas come out more often than every 17 years?
Asian Giant Hornets Are Now in the U.S. and That's Really Bad