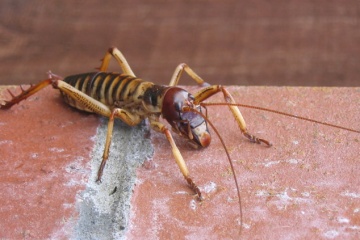 The weta bug is one of the largest insects on Earth.
Gerard Creamer/iStock/Thinkstock

Let's get real here — bugs are just cool. Why wouldn't we want to study them?

Take the social structure of a termite colony for example. Termite colonies are organized in castes, and each caste has its own function. Any termite you encounter is a member of the reproductive, soldier or worker caste. And regardless of whether a termite is male or female, if it's a soldier or worker, it's sterile. Only a member of the reproductive caste can do just that: reproduce. If a particular caste is over-populated, the termites will resort to cannibalism to restore balance.

But studying something just because it's cool often does not attract research grants. The most important lessons we as humans can learn from the natural sciences is humility. The problems we encounter in everyday life may very well have a simple solution in the insect world.

Imagine trying to drill a hole in concrete: You're leaning into the drill, trying to leverage your force against the solid, unwelcoming mass. It's hard. So how does a horntail wasp, an insect as light as a feather, drill into trees with such little effort? To find out, entomologists took a closer look at that "horn tail." The tail is really two needles, inching into the wood by "pushing off and reinforcing each other like a zipper" [source: Goldenberg and Vance]. Turns out, this very design could theoretically help astronauts drill into the surface of Mars or even an asteroid — where leveraging your weight won't work because there's little to no gravity. When entomologists study the insect world, they may resolve a problem we didn't even know we had.

Despite some pretty scary bugs out there, an overwhelming majority of insects and spiders are beneficial to human beings — or at the very least, they're harmless. According to the Smithsonian Institute, "at any given time there are some 10 quintillion (10,000,000,000,000,000,000) individual insects alive." Recent estimates suggest there are more than 200 million insects for each person on the Earth. And while that statistic may immediately conjure up horror-movie images of maggots and swarms of mosquitoes, take comfort in this: Butterflies are bugs too, as are rolly pollies and those friendly little ladybugs.

Above all, take comfort in the fact that you are many times larger than the largest bugs on Earth. New Zealand's giant weta bug grows as long as 3 inches (7.62 centimeters) and weighs as much as 1.5 ounces (42.5 grams). While giant for a bug, that's still a lot smaller than your average shoe or rolled-up newspaper. And an entomologist will confirm that a weta bug cannot (and will not) carry your child off to Middle Earth, nor will it eat you alive. At least, probably not.

Author's Note: Why do we study bugs?

As a liberal arts undergrad at the University of Georgia, I was required to take two science courses: one in the "physical" discipline and another in the "biological" discipline. I eagerly took the geology course first semester my freshman year, but I really dreaded fulfilling that biological science requirement. I'm not sure what originally compelled me to take Intro to Entomology, but each class from the first day was endlessly fascinating. I remain a lifelong amateur "bug" enthusiast, unless one of them is crawling on me.