The African elephant, thought to have numbered in the millions before Europeans colonized the continent, are in an alarming population decline that could threaten the existence of the iconic species, an unprecedented new survey finds.

The Great Elephant Census (GEC), an ambitious two-year survey that counted the majestic animals in 18 countries across Africa, estimates that just more than 350,000 of the 6-ton creatures remain. The census says that the population currently is dropping by about 8 percent annually, due mostly to poachers who slaughter the elephants for their valuable ivory tusks.

Before colonization, as many as 20 million elephants were thought to roam throughout Africa, the study reports. As late as the 1970s, more than 1 million elephants remained. Now, sparked by a renewed spate of poaching that began in 2005, the GEC estimates more than 30,000 elephants a year are dying.

The GEC's findings are laid out in a new paper in the journal PeerJ.

"Ideally," the authors write, "results from this survey will encourage people across Africa and around the world to protect and conserve elephant populations."

The survey was helmed by elephant ecologist Michael J. Chase, the lead author of the paper and founder of the group Elephants Without Borders. He led researchers on aerial surveys that counted both live elephants and carcasses, in both protected areas of the continent and in the wild.

In some of the "protected" areas, the survey found shockingly low numbers of elephants. In a game reserve in Mozambique and one in Tanzania, for example, populations have fallen more than 75 percent in the last 10 years, as CNN points out in a special report. Much of the damage is done by poachers, though dwindling habitats and human-elephant conflicts also play a part.

Their corpses rot in the dry river grass down below. One bull's trunk has been hacked off and placed nearby -- the poachers' signature.

The killers often don't even wait until the elephant is dead before they begin their ugly butchery.

The grotesque scene is repeated again and again across Africa's savannahs.

"I've been asked if I'm optimistic or pessimistic about the future of Africa's elephants, and on days like today, I feel that we are failing the elephants," says Chase.

On the World Wildlife Foundation scale, African elephant are listed as "vulnerable," which is just under "endangered." Conservationists are trying to ensure that elephants don't climb any higher on that scale.

"The future of African savannah elephants," the authors write in PeerJ, "ultimately depends on the resolve of governments, conservation organizations, and people to apply the GEC's findings by fighting poaching, conserving elephant habitats, and mitigating human-elephant conflict."

Now That's Interesting
The survey counted roughly the same number of elephant carcasses, by percentage, in protected areas (game reserves and parks) as in unprotected areas (the wild). "The clear implication," the authors write, “is that many reserves are failing to adequately shield elephants from poaching and human-elephant conflict.” The GEC calls for heightened anti-poaching measures in both protected and unprotected areas.

Weird Physics: The Closer You Get to the Sun, the Cooler It Gets 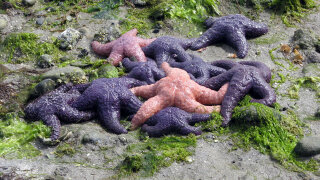 What Happens When a Keystone Species Goes Extinct?