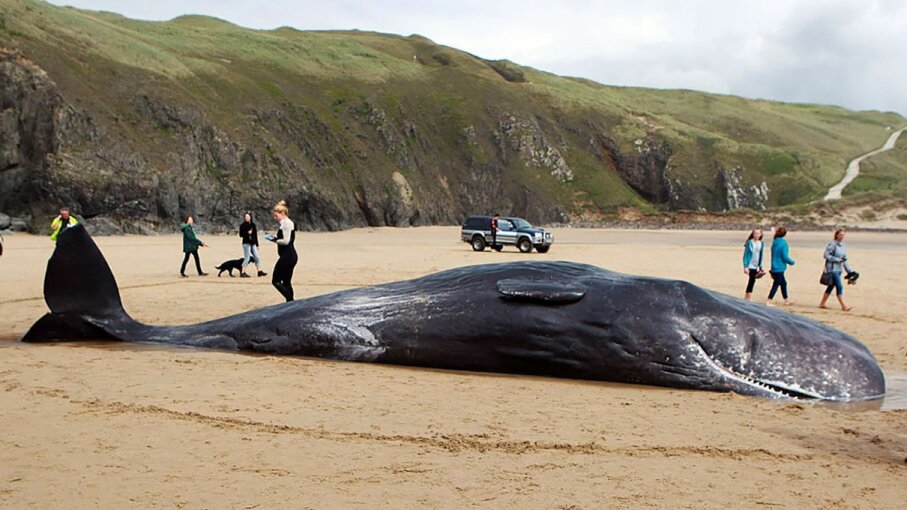 A female sperm whale stranded on a Cornish beach on July 10, 2016, died on the shore in Cornwall, England. Graham Stone/Barcroft Media/Getty Images

Each year, hundreds of otherwise healthy whales wind up stranded on coastlines across the globe. Most are still alive at the moment they get stuck, but then within a matter of hours die from distress: suffocating under their own weight, drowning in high tide or, conversely, dehydrating. Why does this happen?

No one has a clear answer, but researchers may be getting closer to deciphering the mystery of mass strandings — and they're looking to the sun for clues.

NASA heliophysicist Antii Pulkkinen, stationed at the Goddard Space Flight Center is working with the federal Bureau of Ocean Energy Management and the International Fund for Animal Welfare to parse years of data that may provide a link between solar flares and beached whales. Past research from 2005 suggested a link between the phenomena, but this new undertaking will be the first time quantitative research has been used to gather statistically significant data on the possible relationship.

The hope is that by pulling data from years of whale beachings, scientists will understand the relationship between solar flares and whale strandings.

"If we understand the relationship between the two, we may be able to use observations of solar storms as an early warning for potential strandings to occur," says project collaborator Katie Moore, the director of IFAW's global Animal Rescue Program, in a statement. "This would allow stranding responders in global hotspots, and really around the world, to be better prepared to respond, thus having the opportunity to save more animals."

More than 200 pilot whales beached on February 11, 2017, on a beach during a mass stranding at New Zealand's Farewell Spit.
MARTY MELVILLE/AFP/Getty Images
A crowd gathers to watch at California's Dockweiler State Beach on July 1, 2016, as workers attemp to take a dead humpback whale back out to the ocean.
Frederic J. Brown/AFP/Getty Images
Now That's Interesting
Researchers believe the moon's gravitational influences also make it difficult for whales to navigate open oceans. When there's a full moon or a new moon in combination with a coastal storm, whales may swim into too-shallow waters.