Bobcats Are Back From the Brink (and Possibly in Your Backyard) 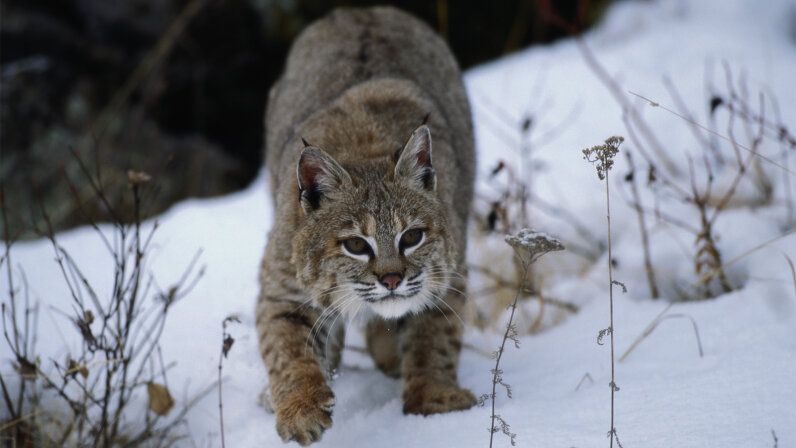 Bobcats are thriving throughout the continental U.S., but their strictly carnivorous diet creates a substantial challenge as they try to acclimate to encroaching suburban and urban human populations. Jeremy Woodhouse/Getty Images

If you live in the United States, you might never see a bobcat in the wild, but that doesn't mean they're not there. In fact, just because you haven't seen one in your neighborhood yet, doesn't mean there's not a bobcat sighting in your future.

Bobcats (Lynx rufus), are doing great — thanks for asking. These days they're pretty common and can be found in almost every state in the Lower 48, as well as most of Mexico and parts of Canada. They look a bit like a domestic house cat — in fact, people have been known to try to rescue bobcat kittens from the side of the road — except that adults grow to be as big as a midsized dog, and a far sight less friendly.

With a sleek, brown, spotted coat, a short tail and tufted ears, you would never mistake a grown bobcat for a pet, but you might mistake it for a Canadian lynx (Lynx canadensis). In North America, the difference between a bobcat and a lynx has a bit to do with the size of the feet, the color of the coat and the length of the ear tufts. Lynx, however, live in northern latitudes and high elevations, and bobcats can be found almost anywhere — deserts, wetlands, forests, you name it. Also, bobcats have notoriously assertive personalities — according to the San Diego Zoo, they're referred to by zookeepers as the "spitfires of the Animal Kingdom" for their unwillingness to back down from a kill and just general audacity.

Not only are bobcats tenacious, they're also resilient and adaptable to land use change.

"Bobcats tend to spend much of their time where the food is," says John Litvaitis, emeritus professor in the department of natural resources & the environment at the University of New Hampshire. "Brushy areas that support small mammals and rabbits are often the most preferred."

Why Bobcats Began to Disappear

According to Litvaitis' research, bounty records from New Hampshire from the early 1800s to today show that as old growth trees were cleared for agriculture and timber, replaced in many places with brushy young forests, bobcat numbers skyrocketed — their favorite foods (rabbits, deer, grouse and basically anything else that likes to live in a scrubby, impenetrable thicket) were well supported by a young forest.

But as the forests aged into old ones that didn't harbor as many rabbits, as coyotes (which compete with bobcats) were introduced to New Hampshire, and as bobcat furs became popular in the mid-20th century, numbers plummeted. These factors, accompanied by some particularly harsh winters in New Hampshire in the 1970s and 1980s, resulted in the bobcat population tanking — by 1989, the bobcat population in the state where they had once flourished was most likely fewer than 150. A similar trend could be seen all over the U.S.

And How They've Made a Comeback

But then states started protecting bobcats by putting strict limits on how many could be hunted or trapped. And it turns out, if people stop actively persecuting bobcats, they actually do just fine.

"Bobcat populations are increasing now, throughout much of their geographic range," says Litvaitis. "I am amazed at the abilities they have to adapt to a demanding and changing environment because, unlike coyotes and foxes, bobcats are strict carnivores, so their diet places substantial challenges to acclimating to suburban and urban life."

In New Hampshire, bobcat numbers were estimated to be around 1,400 in 2013, and are even higher today.

So, how do they manage maintaining a strict carnivore's diet while living catch-as-catch-can in human-centered landscapes from Waverly, Iowa, to Los Angeles? They work smarter, not harder, preying on our backyard chickens and other animals that do well hanging out around people.

"In the northeast, staying close to a bird feeder during winter seems to help bobcats snag unsuspecting squirrels and thus get through the toughest time of year," says Litvaitis.

Of course, cohabiting with humans isn't always great for either the bobcat or human residents. The cats are more likely to be hit by cars or have unpleasant run-in with humans if they're lounging around in somebody's backward waiting for a turkey or chipmunk to wander through. Should you encounter a bobcat, the best advice is to give it as much respect and space as possible. Similarly, a small dog or house cat might be targeted by a bobcat as a potential meal, and domestic cats are susceptible to a tick-borne disease called "bobcat fever" (cytauxzoonosis), for which bobcats are the natural host.

In the meantime, bobcats are doing so well that some states, like Illinois, have passed laws reinstating bobcat hunting and trapping season for the first time in 40 years. But now the question is, how do we maintain a good relationship with bobcat neighbors? It's tricky, but isn't there something kind of wonderful about the idea of having a wild cat in your backyard?

"I'm happy they're thriving," says Litvaitis. "For me, they symbolize the wild portion of nature, and I'm glad they're doing well."

Now That's Interesting
A full-grown bobcat is only about 33 pounds (15 kilograms) but is able to bring down a 250-pound (113-kilogram) deer by itself.