Do horses with broken legs have to be shot?

Browse the article Do horses with broken legs have to be shot? 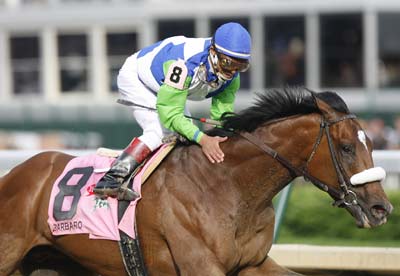 Barbaro wins the 2006 Kentucky Derby, seen here. Two weeks later, the Preakness Stakes proved to be his final race. A broken leg would be the end of his career and eventually his life. See more pictures of mammals.
Mike Ehrmann/WireImage/Getty Images

Back in the Wild West, a horse with a broken leg might have spent its final seconds staring down the barrel of a cowboy's gun. In the old days and today, horses are commonly euthanized after breaking their legs because they have a small chance of successful recovery. Researchers are working hard to try and discover new techniques that will improve an equine's chances in the face of a fracture. For now, an easy fix remains elusive.

It's difficult for a horse's leg to heal due to a combination of factors. Their legs must absorb considerable shock as their powerful bo­dies gallop at high speeds. Horses engage in a lot of physical activity, and the consequences of this behavior can eventually lead to deteriorated leg bones and increased opportunities to fall. Another thing to consider is how many leg bones horses have. Out of the 205 bones that make up a horse's entire body, 80 of them are located in its legs. The com­plex system of joints, bones, ligaments, tendons, cartilage, lubricant, laminate and hooves that contribute to a horse's amazing speed can also be the cause of its downfall. What's more, between 60 to 65 percent of a horse's weight rests on its front legs -- that's why most of its injuries occur here.

Many problems can affect horses' legs, like inflammation, osteoarthritis, joint issues and diseases and of course, broken bones. Recovery is further complicated because horses can't lie down the entire time they recuperate. Horses are programmed to stand a good portion of the time -- including while they sleep. As a prey species, they must be ready to flee as fast as possible, which is why horses stay on their toes (or hooves to be more accurate).

Now that we understand why a horse's legs are so important to its overall health and performance, let's find out what happens when those fragile legs break and if they'll have to stare down the barrel of a shotgun.

Can You Fix a Horse's Broken Leg? 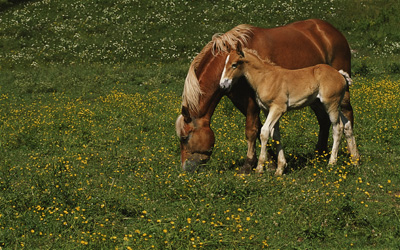 Though horses are still frequently euthanized after breaking a leg, today's procedure is usually accomplished in a more humane manner, like with an intravenous injection of barbiturates, performed by a veterinarian [source: Equine Protection Network]. And it's not just racehorses that sustain leg injuries -- tiny ponies can, too. In addition to kicks and crashes, simple accidents like missteps can cause serious breaks and injuries. Fatigue and the musculoskeletal structure of the horse itself can also be factors. Hard-to-diagnose pre-existing issues such as strained tendons, hairline fractures and microfractures can also contribute to broken bones.

If the worst should happen and a horse breaks its leg, there are a number of factors that help determine if a vet can fix a horse's broken leg and bring the animal back to good health. Some questions an owner with an injured animal needs to ask include:

Even if a horse owner decides to give the broken leg a chance to heal, there are a number of things that can go wrong during the recovery process. Learn about some of the hurdles these horses face on the next page. ­

One way people are attempting to help prevent racehorse injuries is by using synthetic materials when designing racetrack surfaces. For example, the top layer of Polytrack™ consists of silica sand, fiber and recycled material [source: Keeneland]. The track's absorbent inner layers create a spongy track, able to cushion the horses' steps and absorb some of the shock, decreasing the likelihood of a misstep or a twisted leg. Exercise is important in keeping horses healthy, but so is giving them plenty of time to recuperate after moderate injuries and stresses. Owners can also give a horse nutritional supplements which will help promote strong, healthy hooves, joints and bones.

Complications of Treating a Broken Leg 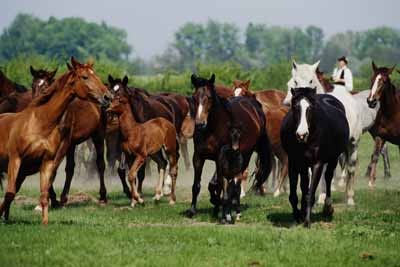 Horses are majestic animals, but they frequently suffer from serious health issues if not properly cared for.
Tim Graham/The Image Bank/Getty Images

You might be asking, "Even though it's difficult for a horse's broken leg to heal, why not let nature run its course and decide whether the horse will live or die?" Part of the answer is that several painful conditions can develop during the rehabilitation process. Some people consider euthanizing the animal more humane than letting it live and suffer.

You usually can't save the horse's life just by amputating the broken leg. Horses aren't like dogs, which can usually live a fairly active lifestyle on three legs. Horses are heavier and this weight can cause problems for the other hooves. Unfortunately, few horses can adjust to prostheses. Horses must be in good overall health, be able to adapt to new situations and have an owner that's willing to spend his or her time and money on follow-up prosthesis treatments [source: Willamette Valley Equine].

There are many complications of treating a broken leg. Here are a few examples of some of the issues that can affect recovery:

We've taken a closer look at the questions a horse owner faces in the event his or her horse breaks a leg. Go to the next page for links to even more information about horses.

2008 Kentucky Derby runner-up Eight Belles was euthanized on the spot after she inexplicably broke her two front ankles immediately after the race concluded. Barbaro triumphed to become the Kentucky Derby champion in 2006, but he suffered a fall at the Preakness Stakes shortly thereafter. Barbaro struggled for months to recover, but the post-op complications were too much, and the well-loved horse was euthanized on Jan. 29, 2007.