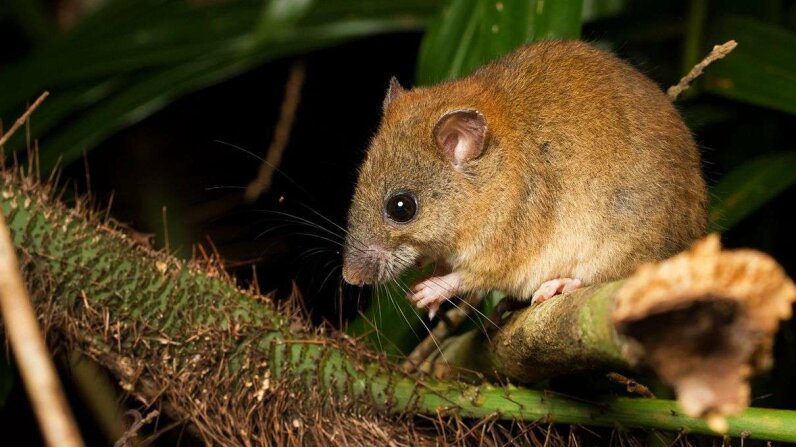 A species of melomys related to the Australian species recently thought to have gone exctinct. Cameron DeJong/Flickr/CC2.0

The world seems to have lost its first mammal thanks to man-made climate change. The Bramble Cay melomys, a small rodent found only on a distant Australian island, has been officially declared extinct.

A new report investigated the population of the mouse-like creature and found, well, nothing to report. The Bramble Cay melomys (Melomys rubicola) already lived a precarious life. Its only habitat was the small island that gave it its name, and it ate vegetation that grew on the cay that is part of Australia's Great Barrier Reef. A six-day survey found no rodents on the island whatsoever — only ghost crabs.

The island itself topped out at only 10 feet (3 meters) above sea level, and that proved to be the undoing of the melomys. The island today — when measured at high tide — is only 63 percent the size it was in the late 1990s. In addition to the loss of land, rising sea levels caused more saltwater to flow into the interior of the small island, now only 6.3 acres large. The ocean water salinated the ground, fewer plants grew because of the salt in the sandy soil, and the rodents had less plants to eat. Loss of food and a 97 percent loss of habitable space, according to the paper, caused the population to collapse. The paper also suggests ocean tides may have been directly responsible for the deaths of some of the rodents, drowning them or sweeping them out to sea.

"The key factor responsible for the extirpation of this population was almost certainly ocean inundation of the low-lying cay," write the paper authors, "very likely on multiple occasions, during the last decade, causing dramatic habitat loss and perhaps also direct mortality of individuals."

The world's sea levels have risen 19 inches (48 centimeters) since 1901, a rate unprecedented over the past 6,000 years. Additionally, the report finds, for the past 20 years sea levels in the region of Bramble Cay have risen at double the global rate.

The melomys is also known as the mosaic-tailed rat, and Melomys rubicola was the only mammal endemic to the Great Barrier Reef. It was first recorded by sailors in 1845, and the last was seen on Bramble Cay in 2009. Twenty-two other melomys species exist in Australia, Indonesia and Papua New Guinea.

Now That's Interesting
A new study indicates that the same meteor impact that led to the extinction of the dinosaurs also killed off more than 90 percent of the mammalian species that existed at the time; all today's mammals, including humans, are descended from the surviving 10 percent.