by Jesslyn Shields Jan 28, 2016
Thanks to rapid climate change, the snowshoe hare's coat, once a camouflage, may be a life-shortening disadvantage. Thinkstock/Getty/HowStuffWorks

How you're dressed can be a matter of life and death. We humans know the feeling from middle school, but new research suggests that climate change is creating dangerous conditions for the snowshoe hare (Lepus americanus), an animal whose life depends on dressing for the occasion.

Let's just say you're invited to a pool party. The most appropriate outfit would normally be a bathing suit, right? But imagine that, by some nightmarish turn of events, you show up to the party to find, not only is the pool empty, but everybody else is fully dressed. And they're all looking at you. Not in a good way.

Snowshoe hares are native to the northern United States and Canada — places that have historically been blanketed in snow during winter months. Each year, these bunnies shed their brown summer coats and grow fluffy white ones in order to better blend into their surroundings and avoid predators in an ecosystem where they hold the illustrious title of "Everybody's Favorite Snack." But in recent decades, the snowshoe hare's camo strategy hasn't benefitted them as well as it once did; snowfalls have been arriving later and melting earlier, putting the hares in a vulnerable position.

"When there's no snow on the ground, a white snowshoe hare sticks out like a lightbulb on the landscape," says North Carolina State University researcher L. Scott Mills. He first noticed this while in Montana, looking for a subject for a study on how climate change directly affects animals in the wild.

"Most animals in the wild are being impacted not only by climate change, but also by things like habitat fragmentation and land use,” says Mills. “I started noticing these white snowshoe hares during times when there wasn't any snow, and realized, wow — this is a direct case of climate change completely messing up an animal's camouflage!"

A lynx chasing a snowshoe hare would have a better chance of catching the rabbit if its white winter coat were contrasted against a dark background.
Joe McDonald/Corbis

As it turns out Mills wasn't the only one noticing these winter "lightbulbs." According to the study he co-authored with his doctoral student, Marketa Zimova, the wild snowshoe hares radio-collared for their study were 7 percent less likely to survive during weeks when their coat color did not match their surroundings. Turns out, predators like mountain lions, wolves, coyotes and owls also notice a white bunny in a brown field, proving, perhaps once and for all, the conventional wisdom of 13 year olds everywhere: mismatch kills.

The paper published in Ecology Letters this week suggests that the costs of snowshoe hares not being able to blend into their surroundings are high enough to cause their populations to decline dramatically. But the good news is that not all individual hares molt at the same time, so it's possible that as a species, they'll be able to adapt.

The research team is now studying whether snowshoe hares, as well as the other 14 species worldwide (Arctic foxes, ermines, caribou, ptarmigans and more) that seasonally change the color of their coats, will be able to evolve one step ahead of climate change.

"The big question is, how much can animals respond to any global stressor?" says Mills. "Snowshoe hares can evolve, but evolution isn't magic. They might need help keeping their populations large enough or keeping their habitats connected. If there's a hope that these animals can persist through climate change, we want to figure out how we can help."

Now That's Interesting
Climate change is having a measurable impact on numerous species; for instance, it’s making it tougher for polar bears to hunt the food they need to survive.

Listen to Your Mother, Even if She Resembles an Electronic Russian Nesting Doll 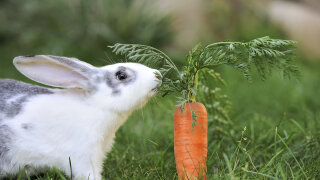 Is it too late to stop climate change?