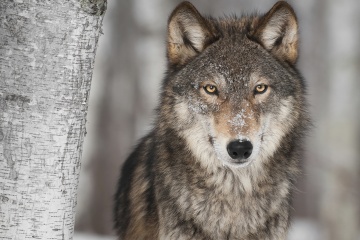 We all know wolves can be formidable predators, but do they have a bulkier, more menacing relative lurking out there?
Holly Kuchera/Thinkstock

Confession: When I was somewhere north of 20 years old, I was on a beach somewhere in Virginia, attempting to explain to my brother and sister-in-law why it was so weird that the University of Michigan's mascot was the wolverine. It was like having a unicorn for a mascot, I said. Or a jackalope -- that mythical half-rabbit/half-antelope that adorns stupid postcards in the West. They weren't getting it and kept on insisting it really wasn't like that at all. Finally, I had to ask point-blank: Were they saying that wolverines were ... real?

It turns out that wolverines are real. I did not know this; I had never encountered a wolverine apart from the pages of comic books. I assumed that Wolverine was his own thing -- some half-man/half-wolf hybrid that somehow missed the werewolf title in a smart rebranding move.

So you have to believe me when I tell you that dire wolves are real and not another imaginary creature from George R.R. Martin. But here's a twist: They don't exist. The dire wolf once wandered through North and South America roughly 12,000 to 300,000 years ago during the Late Pleistocene era [source: San Diego Zoo].

Dire wolves looked quite a bit like wolves, although they were nearly a quarter heavier than the modern grey wolf [source: Narducci]. They also had larger heads and shorter, stouter legs than the not-as-big-and-bad wolves we know today. More importantly the dire wolf's reputation was its teeth, which were much bigger. Scientists believe that dire wolves used their enormous chompers to crush the bones of their dinner, as fossilized dire wolf teeth exhibit a pattern of wear that's consistent with bone chewing. Due to its gnawing, it is thought to have hunted and fed in a similar way to the hyena. These guys weren't just satisfied with the flesh: They were ready to bolt down the marrow and bone too [source: Illinois State Museum].

Scientists think that dire wolves fed on the large herbivores that proliferated at the end of the Ice Age. When the late Pleistocene extinction wiped out large numbers of these herbivores, it's possible that the dire wolf no longer had a reliable food source. But we can't say that with much certainty; as with many extinctions, no one is entirely sure what led to the dire wolf's ultimate demise [source: Illinois State Museum].

But cheer up: If you're dying to have your own dire wolf, the American Alsatian Breeder's Association is right there with you. They've been breeding some Alsatians to resemble the dire wolf's broader head, shorter legs and bigger body. Their furry friends aren't quite as big at around 130 pounds. Remember, these pups are in no way genetically related to the real dire wolves. But they're probably a lot friendlier -- and far less likely to crush your skull and eat it [source: Edidin].