Browse the article How can dolphins disarm sea mines? 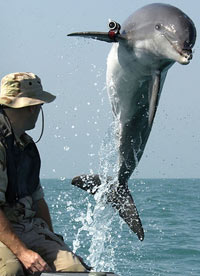 Animals, for better or for worse, have a long history as faithful allies to humans in warzones. Perhaps most notable of the battlefield animals is the horse, who throughout human history has aided soldiers during combat. Up to this day, militaries still train dogs to guard sites and soldiers, find explosives and conduct search and rescue. But still another animal aids the military by going where dogs and horses can't -- underwater.

Undersea mines have been responsible for sinking or damaging many ships since World War II. In fact, more ships have been damaged from mines than from all other causes (such as active enemy attacks) combined [source: Babb].

Realizing their irresistible friendliness, trainability and affinity for humans, the U.S. Navy has been training bottlenose dolphins (and some sea lions) since the 1960s to find explosive mines underwater, as well as other suspicious objects and swimmers. Though they don't technically disarm the dangerous mines, the dolphins do locate the mines for humans to subsequently disarm or avoid them.

Using fish as a reward, the Navy has trained dolphins to spot suspicious, manmade, metal objects from far away. The dolphin learns to search for a mine, and upon finding one, swims back up to the boat to poke an appropriate signifier, such as a ball, with its nose. The humans then give the dolphin a buoy or a special device known as an acoustic transponder, which the animal leaves in the area it spotted the mine. This device produces a distinct sound that allows human divers to find it later.

This photo of a mine and torpedo-finding dolphin was taken in 1973.
Evening Standard/Getty Images

Though the Navy can equip dolphins with cameras and sensors, it's really the dolphins' natural abilities that make them perfect for the job. Unlike the mechanical devices the Navy builds to detect mines, dolphins can tell the difference between man-made and natural objects, an invaluable skill given that enemies craftily disguise mines. It turns out that dolphins have a remarkably sophisticated sonar ability (using their sense of hearing) to perceive objects in even very murky water. This ability is so sophisticated that human technology hasn't come close to replicating it.

Read on to learn more about the dolphin's sonar power. 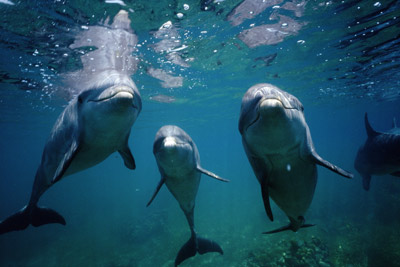 These bottle-nosed dolphins can spot faraway objects in murky waters because of their echolocation capabilities.
Stuart Westmorland/The Image Bank/Getty Images

Sonar refers to sound navigation ranging. It involves using and interpreting sounds to detect something's location underwater and is especially handy for two reasons: Bodies of water are often far too murky for sight, and sound actually travels quickly underwater, much faster than it does in air.

Sonar technology sends out sounds and waits for the sounds to bounce off other objects and come back (the same way an echo bounces back to us in a cave). This technology is called active sonar, as opposed to passive sonar, or simply listening for the noises of other active objects. Remarkably, with sonar, we can interpret vital information, such as exactly how far away enemy submarines are.

Unlike humans, however, dolphins have been using this skill, known as biosonar, for millennia. So they're pretty darn good at it. The tricks of sonar are built into their DNA, so much so that they can tell the difference between a BB gun pellet and a kernel of corn from 50 feet away [source: Gasperini]. A dolphin's sonar process, also used by bats and some whales, is called echolocation. If you've ever heard a dolphin, you'll immediately recognize its characteristic clicks and squeaks. But there's more than meets the ear: Many of the clicks are simply at frequencies too high for the human ear to detect. Essentially, dolphins use these clicks as active sonar mechanisms.

The dolphin's amazing biosonar allows it to distinguish a quarter from a dime while blindfolded.
HSW

1)  The dolphin uses nasal passages to make a click and sends it through its forehead, which focuses the sounds together into a beam before sending it into the water.

2)   When the sound hits an object in the water, it bounces back to the dolphin as an echo.

3)   The dolphin absorbs this returning echo through its jaw.

4)   A passage of fat from the jaw conducts the sound to the dolphin's inner ear, which exchanges nerve impulses with its brain to interpret the object's characteristics, such as size, shape and material.

One way to think about the echolocation process is to imagine you're in a pitch-black room with only a flickering flashlight to guide you. To help understand an object, a dolphin will move around and read it from multiple points of view, as you might in the dark room, as well as with varying kinds of clicks. They'll even adapt for noisy environments by adjusting the frequency of their clicks. Using this process, dolphins can determine the size and shape of objects and even, in some cases, distinguish different metals, such as brass and copper, from far away, which assists them in finding mines [source: Bechtel].

But scientists are not sure how a dolphin's brain interprets sonar information. So much of our human understanding relies on visual information that it's hard for us to wrap our brains around the idea of "seeing" particular objects with our ears. Because dolphins are so exceptionally good with sonar, studying them hopefully will help us improve our own sonar technology. Until then, however, we can certainly use the dolphins themselves to find dangerous underwater objects. Right?

Actually, some people question the ethics behind using dolphins for such purposes. On the next page, we'll investigate that side of the story.

Caught in a Net

The sonar process that dolphins rely on to "see" is exactly why they're so prone to getting caught in nets. Fishers throw nets down into the water and unintentionally catch dolphins in the process because the nets don't reflect a dolphin's biosonar clicks. However, new nets equipped with a plastic beacon in the shape of a spherical shell that reflect and amplify echolocation signals now prevent these accidents [source: Ransford] 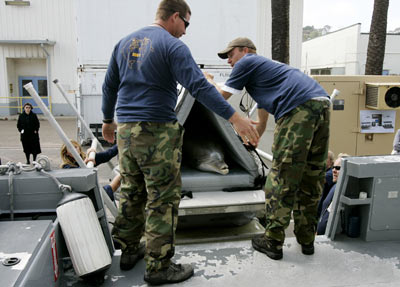 As amazing as it is that we can train dolphins to save the lives of U.S. sailors, the thought of sending animals to find deadly mines strikes many people as inherently unethical.

The Navy argues, however, that the mine-hunting process is much safer for the dolphins than it may sound. Dolphins aren't trained to get close to a mine, but rather sense it from a safe distance (which their powerful sonar skill allows them to do). The Navy also is quick to point out that were the dolphins to get close to the mine, it wouldn't explode. Mines aren't built to detonate when disturbed by marine life, but rather by large, heavy ships. If natural underwater creatures could detonate a mine, the mine would explode soon after being planted, rendering it useless as a weapon against enemy ships.

Nevertheless, animal rights groups still find fault with the process. To get dolphins to the potentially mine-infested waters, the Navy must transport them. This transportation process, which involves carrying dolphins within slings in tanks during a long airplane ride, may be devastating for the animals [source: Squatriglia]. The stress endured could weaken the dolphins' immune systems.

Not only must the dolphins face a rough ride, but once they get there, the environment they face could bring them discomfort. Upon hearing that the Navy planned to bring their dolphins to the cold waters off Washington state, one animal rights group strongly objected, and as a campaign to gain public attention, started knitting sweaters for the dolphins. Yet another concern is that the dolphins might get lost. In the end, many animal activists question: Is it ever OK to use innocent creatures, who are completely ignorant of the danger involved, in war?

Responding to such accusations, the Navy stands firm that the dolphins are well cared for. It claims that staff veterinarians nurture the dolphins diligently and are on call at all times.

Flip to the next page to find links to related subjects, as well as a link to a U.S. Navy Marine Mammal Program video.

Leave the Gun, Take the Canary

Canaries offer a different kind of mine detection. Coal mines are breeding grounds for methane and carbon monoxide, which are hazardous to human health, as well as conducive to deadly explosions. Before methane or carbon monoxide detectors existed, miners brought canaries down into coal mines with them. If a canary died, it was a sign of the presence of noxious gases and meant it was time to high tail it out of there.