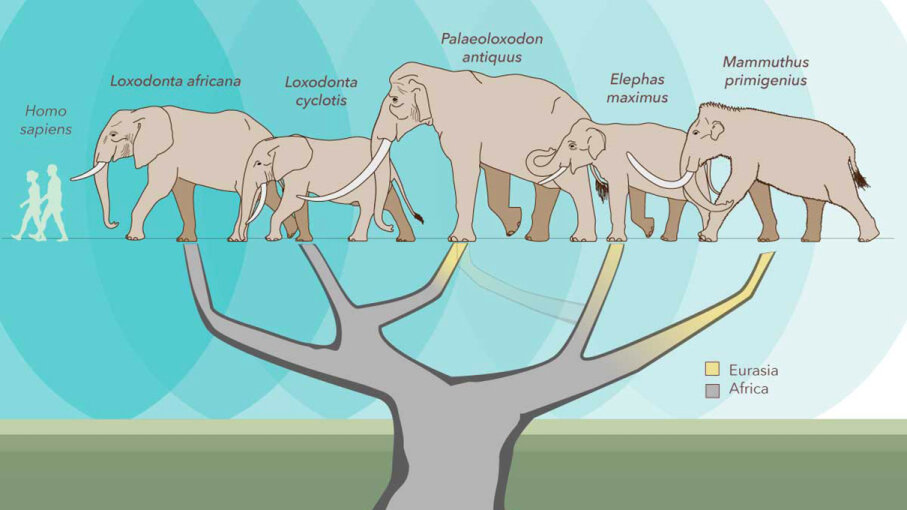 Elephants are the largest mammals living on land these days. Today's African elephants comprise two species (originally considered a singe species, but confirmed as distinct in 2010) and the Asian elephant. But their closest current relative is probably the hyrax, a small, furry rodent-like mammal. However, not all their relatives have been so teensy — some extinct elephant relatives were larger even than the modern behemoths.

A new study analyzing genetic data and published in the journal eLife finds that this XXL ancestral elephant is more closely related to one of today's African elephants than it is the modern Asian elephant. This is surprising, because the ancient straight-tusked giant Palaeoloxodon antiquus actually lived in Eurasia between 1.5 million and 100,000 years ago. The elephant that grew to around 13 feet (four meters) tall and weighed in at about 13 tons (11.8 metric tons) — basically twice as big as modern elephants.

So knowing that forest elephants in the Congo Basin are more closely related to an extinct giant than to their savanna-roaming cousins is certainly interesting, but one of the most significant reasons this fact is important has to do with elephant conservation.

"We've had really good genetic evidence since the year 2001 that forest and savanna elephants in Africa are two different species, but it's been very difficult to convince conservation agencies that that's the case," said coauthor and University of Illinois professor Alfred Roca, in a press release. "With the new genetic evidence from Palaeoloxodon, it becomes almost impossible to argue that the elephants now living in Africa belong to a single species."

The research team examined the mitochondrial DNA (passed only from mother to offspring) and nuclear DNA (which includes information about the father) of African and Asian elephant species, and compared them to DNA extracted from the fossilized bones of 16 wooly mammoths collected from permafrost in cold climates, and four from P. antiquus bones collected in Germany. This is the first time such a good genetic sample has been taken and successfully sequenced from fossils from such a warm climate.

Using this new data, the researchers pieced together a new phylogenetic tree for elephants. They found the ancestor shared by P. antiquus and today's African forest elephant (Loxodonta cyclotis) lived between 1.5 million and 3.5 million years ago, while its shared ancestor with the African bush elephant (Loxodonta africana) lived between 3.9 and 7 million years ago. P. antiquus also moves further from the Asian elephant (Elephas maximus). So, while African elephants are sometimes managed and protected under the assumption they are all the same species, this study proves they're not:

The analysis may have implications for the future, too. Love Dalén, a Swedish palaeogeneticist, told the journal Nature that taxonomists may need to come up with new names for the different elephant species. "Basically Loxodonta is not valid as a genus name," he said after information was announced at a conference in September 2016,

Now That's Interesting
Female elephants are much more vocal than males. Seventy percent of known elephant calls are made by females, and only 30 percent by males.