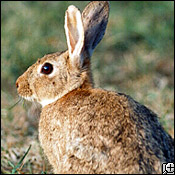 Domesticated rabbits are derived from this species of lagomorph.

It lives in colonies and is frequently found sharing multichambered burrows with several individuals.

It feeds on grasses, weeds, buds, sprouts, and, in winter, bark.

When alarmed, it loudly thumps the ground with its hind foot to warn of approaching danger.

The young are born in a special burrow lined with soft fur and located away from the rest of the colony.

Originally from North Africa and Spain, the species was introduced in Europe in ancient times, and more recently elsewhere around the world, especially Australia and New Zealand, where it is considered an agricultural pest.

Range: Europe and throughout world

Life Cycle: Mating usually December to May, may be year-round; gestation 28 to 33 days, three to nine young born; usually three or four litters per year