Fainting goats, when startled, tense up and fall over. It could take several seconds for them to regain movement. See more pictures of mammals.
John Foxx/Getty Images

The lives of goats, by all appearances, consist mostly of eating, climbing, butting heads and a whole lot of standing on top of things. One particular breed of goat, however, is known for a rather different trait: stiffening up and appearing to faint.

Footage of these fainting goats continues to make the rounds on video-sharing Web sites and cable animal programs. After all, what's more hilarious than watching an entire pack of goats keel over in unison every time a farmer runs up to them with an umbrella?

Yet despite all appearances, these goats (also known as myotonic goats, "Tennessee stiff-legs," "Tennessee wooden-legs," "nervous goats" and "fall-down goats") aren't simply weak of heart or abnormally prone to fright. In fact, fainting goats don't actually faint or lose consciousness at all during these episodes. Due to an congenital (present from birth) medical condition known as myotonia congenita or Thomsen's disease, the goat's muscles tense up when the animal is startled and don't immediately relax. Think of it as a full-body charley horse, except without the pain.

­The severity of the condition varies. Some fainting goats will stiffen up every time they're startled, others less frequently. Symptoms often lessen over time and some animals are able to better adapt to the condition. Younger goats are more prone to fall over and tumble when startled, but as they grow older, many eventually manage to avoid falling down altogether during an episode. They simply run away from a threat on stiffened legs. Older goats also tend to become more secure with their environment and startle less easily.

In this article, we'll take a closer look at this rare breed of goat. We'll look at how myotonic congenita works and how it affects the goats' lives. We'll also examine how they came to be considered a breed and why anyone would choose to encourage their fainting spells.

In the next section, we'll look at why a goat breeder would consider myotonia congenita a desired trait. 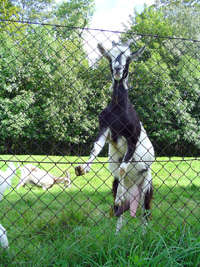 To learn even more about fainting goats and myotonia congenita, check out the links on the next page.