Goats Really Like it When You Smile at Them

by Jesslyn Shields Aug 31, 2018
The relationship between goats and people is an ancient one, and a new study shows that goats actually prefer human beings who smile at them. THEPALMER/Getty Images

We all love a good goat video. But with those weird rectangular pupils, a penchant for eating trash and a mythological association with the devil, goats are a little strange and a lot of us don't know what to do when we actually meet one. Does it want to be patted on its hard, knobbly skull? Should we talk to it? Is it more or less interested in you than, say, a cow would be?

Domestication is a complicated thing. For instance, it's easy to see that most dogs respond favorably when a human grins and talks to them in a squeaky voice. Wolves don't do that. Horses, too, can read our faces for clues to our frame of mind.

But goats have a longer history with humans than any of our other animal friends — we started domesticating them around 10,000 years ago, right around the time we decided it might be nice to collect the seeds of wild edible plants in order to have a little patch of lentils in the back yard. Our relationship with goats is ancient, so it would stand to reason that they would have gotten to know us pretty well by now.

According to a 2016 study, when faced with a difficult puzzle, goats will look to the nearest human for help. Although they weren't bred to be companion animals or beasts of burden, working closely alongside their human handlers on a daily basis, scientists think the sheer longevity of our relationship with these ruminants has led modern goats to focus on humans more than we might expect.

And now a study published Aug. 29, 2018 in Royal Society Open Science finds that goats like it when we smile at them. In the experiment, 35 goats living at a goat sanctuary in the U.K. were released into an enclosure with black-and-white photographs of the same person on the wall — one smiling and one frowning — and timed how long the goat spent gazing at each photo. Though the goats didn't seem to care whether the human in the picture was male or female, but they did show a marked preference for the smiling person, and spent far more time gazing at it.

So next time you meet a goat, smile! It might eat some of your tin cans and poison ivy for you.

Now That's Interesting
A single rogue goat is thought to have helped 75 other goats and sheep headed for slaughter escape an auction house in New Jersey in August, 2018. 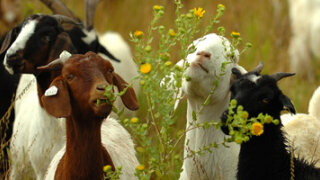 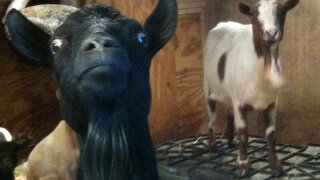 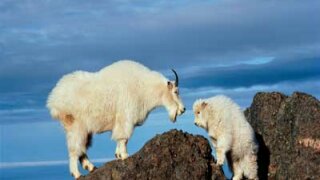