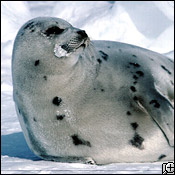 They spend about half the year in the north, feeding on fish and invertebrates.

In the spring, thousands of females congregate on pack ice to give birth and nurse their white-furred pups.

Following weaning, the pups shed their white fur, which is replaced by silver-gray pelage with dark spots. After successive molts, the spots are replaced by the typical harp-shaped marking on the back.

By June the harp seals are moving northward again, swimming and cavorting in the frigid water.

There are three populations of this gregarious seal: one off Newfoundland, one in the Arctic Ocean, and one off Greenland.

Wolves' Return to Yellowstone a Boon for Streams
Dolphins and Porpoises: They're Different!
This Rare Giraffe Is Losing More of Its Color Every Year