Browse the article Do Japanese monkeys season their food? 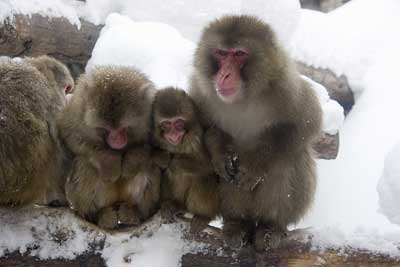 Japanese monkeys inhabit all of the Japanese islands except for Hokkaido. See more pictures of monkeys.
Frank Lukasseck/Getty Images

When you fill your dog's bowl with kibble, does Fido ever squirt ketchup on top before digging in? Or maybe your cat adds a dollop of tartar sauce to its fish-flavored mash prior to consumption?

No? Not surprising. Seasoning one's food seems like a uniquely human trait. We've been sprinkling salt to flavor our meals as far back as 10,000 B.C. [source: UK Food Standards Agency]. Roman soldiers received part of their compensation in the form of salt, hence the word "salary." Today, you'd be hard-pressed to find a house without a decently stocked spice rack.

However, a group of Japanese monkeys, or macaques, challenged that notion during an experiment in the 1950s. As you've probably guessed, Japanese monkeys inhabit all islands of Japan, except for Hokkaido. This geographic range includes subtropical to subarctic climates, making macaques the northernmost-dwelling, nonhuman primates in the world [source: Gron]. To prepare them for such chilly conditions, Japanese monkeys are outfitted with thick brown or gray fur and resemble pink-faced Ewoks.

Groups of around 30 to 40 macaques live together in male-dominated units called troops. They shift between hanging out in trees and on the ground, although females prefer to spend more time aloft [source: Gron]. After reaching sexual maturity, males will leave their own families to travel among different troops in order to mate [source: Tanhehco].

When it comes to food, just about anything goes for macaques. Researchers have documented that the monkeys munch on more than 213 types of plants, not to mention insects and dirt [source: Gron]. For this reason, Japanese monkeys are considered omnivorous animals. Testifying to their broad culinary tastes, captive macaques at Ohama Park in Osaka, Japan, have now been put on a strict diet. Years of devouring snacks from visitors, such as bread and candy, have added up. One particularly stout monkey weighs twice the average for the species, tipping the scales at 63 pounds (29 kilograms) [source: Ryall]. Park officials now request that people not feed the monkeys since they'll readily eat any treat thrown their way.

But what about seasoning their food? Do these indiscriminate eaters pay attention to flavor? Find out on the next page. 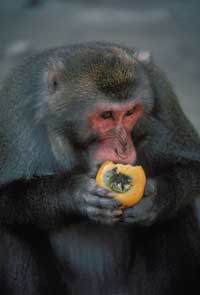 A Japanese monkey munching on a persimmon.
Shin Yoshino/Getty Images

Let's say you're dining with friends at a pizzeria, and one person orders a pie with anchovies. You've never tried anchovies, but you turn up your nose at the odorous fish. When the pizza comes, your friends devour the anchovy slices. Observing their positive reactions, you decide to live a little and take a bite. The next time you eat pizza, you take yours with anchovies as well.

A similar type of behavioral learning through social interaction happened in a group of Japanese monkeys on the island of Koshima in the 1950s. Researchers were studying the macaques and to lure them into the open to better observe their behavior, the researchers gave them sweet potatoes.

Usually, the monkeys would brush excess dirt off the potatoes with their hands before eating them because the grit hurt their teeth. But one day in September 1953, a female the researchers named Imo took the rudimentary potato cleaning a step further by washing hers in a freshwater stream. Five years later, six out of nine members of Imo's family practiced the same potato-washing habit [source: Carpenter]. By 1965, not only had the washing habit been passed to new generations of the macaques, but they also had started rinsing with saltwater instead of freshwater. The monkeys would repeatedly dip their potatoes in the water, then take a bite, implying that they enjoyed the salty flavor. For that reason, researchers suspected that the purpose behind the saltwater habit had evolved from merely cleaning the potatoes to actually seasoning them.

Lead researcher Masao Kawai published the findings in 1965 in the journal "Primates," under the title "Newly-acquired pre-cultural behavior of the natural troop of Japanese monkeys on Koshima islet." Notice there's nothing in that heading about food. That's because the monkeys' acquisition of a taste for salt was merely a byproduct of what had unfolded. Rather, the social learning in macaque troops garnered attention because it implied that monkeys are capable of creating basic cultural practices.

Taking a closer look at how the saltwater-dipping custom caught on throughout the macaque family uncovers other clues at the development of the novel habits. Read on to learn the details of how the potato seasoning spread in the macaque troop.

Imo's mother Eba was the first to mimic the potato washing. Females in the troop were more likely to wash their sweet potatoes than older males. Remember that when they become old enough to mate, male macaques leave the troop, meaning they have less social interaction with their original troop members. Without that integral social interaction and exposure to the new behavioral patterns in a group setting, the older males didn't pick up the habit [source: Carpenter].

Age also played an important role in whether monkeys would wash their potatoes. In general, monkeys younger than the age of two were quicker to try something new. This is because of the inverse relationship between age and brain plasticity -- the brain's ability to create new neural connections required for learning -- which allows us to acquire new skills. Additional behavioral studies with macaques correlated with this age gradient, as the youngest members show the most innovation and least conservatism.

A similar adaptation pattern occurred when testing if the monkeys would try caramel candy. The juvenile and infant macaques paved the way as they were the first ones to eat the candy that researchers gave them. Adults followed suit, as an example of observational learning in monkeys.

The sweet potato washing remained confined to the one macaque troop on the island of Koshima [source: Baumeister]. Nevertheless, Imo's clever idea sparked a novel way of thinking about how animals interact. For more information about monkeys, visit the links on the next page.

The results of the Koshima macaque study have been applied to many aspects of cultural biology and primate research on behavioral adaptations. The results have also popped up in the New Age realm, in the form of the "Hundredth Monkey Phenomenon." Lyall Watson first described this so-called phenomenon in his book "Lifetide" [source: Barker].

Basically, Watson claimed that the potato-washing event demonstrated the concept of "critical mass" in nature. According to his account, there were around 99 macaques that picked up potato washing at Koshima, and one night the 100th monkey began to wash its potato as well. The impetus from that single monkey brought the behavior to the point of critical mass, and the rest of the neighboring macaques began washing their potatoes. Watson and others have applied that concept to how you can spark change by influencing enough people to reach that "hundredth monkey."